What a small price to pay to watch ‘Young Sheldon’ on a TV the size of your wall!

LG is stepping up its game by producing a large, visually stunning, wall-size flatscreen LED TV worth $1.7 million. The hardware is 325 inches in length and bewilders the senses with a brilliant 8K resolution. It aims to compete for profit share from the likes of Sony and Samsung, who have recently unveiled their own wall-size microLED models.

But if you don’t want to spend close to two million dollars on your next television, don’t worry, you can scale down to a 108-inch model for a modest price tag in the low six figures. All of your legitimately wealthy friends will laugh at you, of course, and you’ll be without the joy of staring at such a large screen of light-emitting diodes that your entire field of vision can’t take it all in at once. But you can spend the money you save on other, more frivolous expenses like paying rent or buying food.

This television actually represents a pretty significant jump forward in display technology, as this new set LG screen is set apart from the competition with something called DVLED, short for “Direct View LED.” In the recent past, even the highest definition TVs required an LCD screen between the LEDs and your eyeballs in order to make the picture crisp and clear. Looking at the diodes alone, which were large and far apart, you’d just be staring at a soup of random colors. But as the LEDs get smaller and closer together for enhanced resolution, you get a better picture without a filter screen being necessary.

Keep in mind, though, that in addition to the higher price tag, these sets are the opposite of energy-efficient. So if you’re trying to keep your power consumption down, you’ll probably want to stick with a smaller, 4K model rather than spend your life savings on LG.

KEEP READING: Is 4K Blu-ray Worth It? What You Need to Know Before Upgrading

Ashley has been writing about the gaming and entertainment industry since 2013 when she was a senior featured content contributor at DMFiat.com. She’s covered a wide variety of news topics with a particular interest in the ever-expanding TTRPG scene on Twitch and YouTube. Outside of gaming and entertainment news, she has been a professional freelance copywriter for the last 10 years, has two short stories published in the Chimeraverse Short Story Collection for popular indie comic Incident Report, and is in the process of self-publishing her creative work on her still-under-construction personal blog. 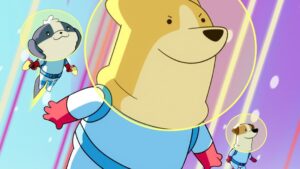