The Pitch: 2022 has really seemed like The Year of Pinocchio. While the original 1883 Italian novel by Carlo Collodi has had its fair share of adaptations over the years (from classic Disney delights to, well, Pauly Shore in middle-aged twink mode), this year saw new takes on the material from two of cinema’s most acclaimed directors. But where Robert Zemeckis’ retelling felt morbid and soulless, master of the macabre Guillermo del Toro returns to gift us with a version that hits the classic beats of the fable, while slotting it handily into the concerns and aesthetics the director has pursued his entire career.

The lumber is the same, but the construction is quite different: Pinocchio (the cherubic Gregory Mann) is still the wooden boy whittled into existence by old carpenter Geppetto (David Bradley), left to discover the joys and vagaries of the outside world with the help of a very moralistic cricket (Ewan McGregor). But del Toro, alongside co-director and stop motion titan Mark Gustafson, twist and bend the story to fit del Toro’s uniquely dark fairytales.

It’s now set against the backdrop of 1930s fascist Italy, where even the most far-off villages must endure the performative heiling and administrative presence of a local Podestà (Ron Perlman) who holds the town, and his browbeaten son (Finn Wolfhard), in a fascistic grip. Rather than a willing dispenser of ethical truths, Sebastian J. Cricket is a grumpy memoirist who lives literally inside Pinocchio’s heart (as he was carved from the tree where Sebastian had made his home).

And, in a surprisingly new twist for both 2022 adaptations, Pinocchio is burdened with the terrible duty of replacing Geppetto’s lost son, killed after a stray bomb hits the church in which he’s frolicking. A wood sprite (Tilda Swinton) gives life — seemingly eternal, as we learn — to the doll, hoping to restore light to the grieving father. But as with all sons, the pressure of expectation can sometimes prove too great for both father and child, sending Pinocchio on a quest to find himself and explore the strange ways of the mortal world.

A Hidden Life: del Toro has been clamoring to tell his version of Pinocchio for years, if not decades, and it’s easy to see why: It’s a cornerstone story for him personally, an inspiration for so many of the dark fantasies we associate with him.

And indeed, this version feels as assured and personal as any we’ve seen from him: the lapsed Catholicism, the ways war strips away innocence, the grim costs of magical gifts. In this way, Pinocchio is of a piece with works like Pan’s Labyrinth (Swinton’s wood sprite reminds one of Doug Jones’ faun) and The Devil’s Backbone (one shot of a bomb dropping from the POV of the bomber is repeated in both films) — morality tales presented through the otherworldly sheen of the supernatural. 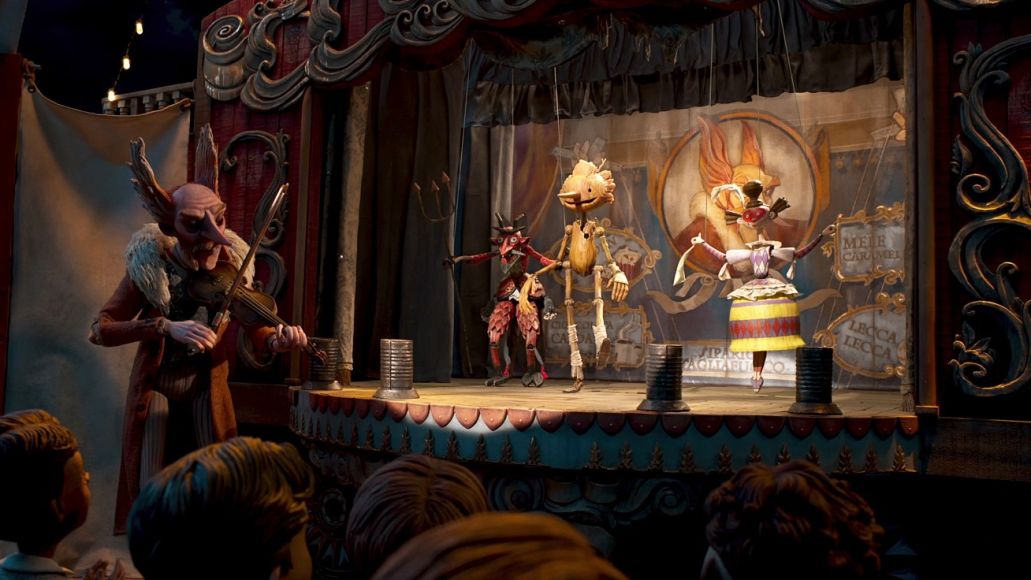