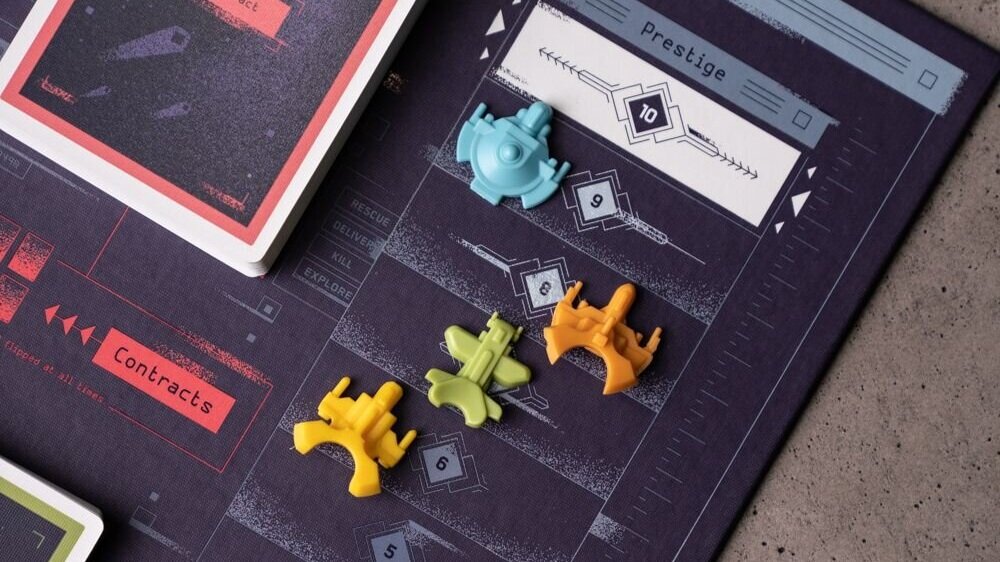 Deck-building games have grown in popularity a lot in the past few years. What is most amazing about deck building is the variety of games in which it has been implemented. From battle games like Ascension and Star Realms to more unique deck-building concepts in The Quest For El Dorado or dice building in Dice Forge, there seems to be no end in how deck building can be integrated into games. Moonrakers is another unique spin on deck building where players make a ship and hire crew members to fulfill contracts to gain the most prestige.

Moonraker’s main objective is to use the cards/deck to complete bigger and bigger contracts until a player can reach ten prestige points (which are awarded when completing most contracts). The contracts will require certain amounts of energy, speed, crew members, attack, and shields. Contracts come in a variety of sizes, and lots of them will require help from your ship parts, other players, and luck in what cards you draw. This breaks the game into three major parts: collecting new cards for your deck (primarily crew members), collecting parts for your ship, and negotiating with other players to help complete contacts.

The crew cards that players can buy are all pretty great. Because only one can be purchased a turn, if you have the money, your deck might possibly be half crew members by the end makes them terribly precious. This means that the crew members should feel powerful, impactful, and exciting when drawn, and they are. I found them all to be pretty well balanced and strong enough to merit the money spent. Some might have more flexibility and practical usage than others, but they all have their strengths.