Now that we’ve gotten our first proper look at Eternals, the fan theories are beginning to come together. One of the biggest questions to answer is why this team of incredibly powerful heroes hasn’t intervened in any of the crises faced by the MCU’s Earth. You could chalk up some of it to their philosophy of letting mankind make its own mistakes, but you’d think they’d at least step in when Thanos – who’s linked to the Eternals – is out to destroy half of all life in the universe

There’s a decent theory, though, that Eternals will explain this with a plot point from Neil Gaiman and John Romita’s 2006 comic series of the same name. This version of the characters finds them living on Earth with their memories wiped, only realizing their true natures when Ikaris begins remembering his past and seeks out the others. Gaiman commented on the trailer this week and referenced his run, saying:

“I watched this and got shivery at the way that the fires that Jack Kirby lit get passed from creator to creator, and keep burning. I’m glad I got to touch the flame Jack kindled, on the Eternals, and to pass it on.”

His story would provide Chloé Zhao with a great excuse as to why they haven’t previously appeared and the trailer might hint that the characters have been living ‘fake’ lives. For example, Kumail Nanjiani’s Kingo is a Bollywood star and Gemma Chan’s Sersi is a museum curator (which has shades of the DCEU Wonder Woman). If they did go down this route, it may also indicate who the villain of the movie will be.

In Gaiman’s comic, the memory loss was caused by Sprite, who’s trapped as a child despite being millions of years old. Millennia stuck in this immature form has left her bitter at constantly being treated like a kid. Desperate for any chance to age, she taps into the powers of a sleeping Celestial, turns herself human and wipes the minds of the other Eternals.

We’ll see much more of Eternals before its November 5th release, so keep an eye on the next trailers for additional clues that elements of Gaiman’s run are going to be brought to the MCU. 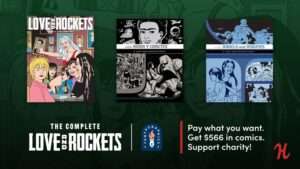