But in one of the show’s many exciting intellectual ideas, this highly bingeable series is not about the terror of the monsters, but what would happen next—how so many people would lose their minds and sense of self, especially if such a literal force of wrath were rationalized as vengeance for our sins. The terror here is people, the opportunists, cult leaders, and blind believers who follow fear to the point of shaming others, hating others, destroying each other for the goal of earning God’s mercy. Yeon’s series mixes this grounded horror with thoughtful discussions about how we define a sin, and what we as human beings are deserving of from such a God.

But before the religious folks project their own meaning onto it, the opening beatdown is investigated like a crime by Jin Kyunghun (Yang Ik-june), who provides our first-person perspective into this phenomenon. He has a sad backstory involving his wife being murdered by someone and then getting out of jail just years later. That becomes a sore spot that is pressed upon by a Jung Jinsu, a stoic chairman of a religious group called the New Truth that believes the monsters are attacking sinners. Yoo Ah-in is excellent in this role that has him delivering cryptic words of faith with a certain deadness in his eyes, making him all the more calming to his rabid supporters, especially as more deadly decrees start to happen. They believe he is right when he says that the attacks are related to someone’s great sin. The New Truth has inspired its own QAnon-like media following with a radical group called The Arrowhead, who are riled up broadcast-by-broadcast by a screeching man named Dongwook (Kim Do-yoon). From a gaming chair, he makes grandiose assumptions about why so-and-so received a decree, and shows how the mania of fear can lead to witch hunts. Members of the Arrowhead, usually teenagers with baseball bats, then go out hunting.

Numerous people get in the crosshairs of Jung Jinsu and the New Truth and the Arrowhead, including a lawyer named Min Hyejin (Kim Hyun-joo), who initially tries to help a doomed woman who receives a decree and decides to let the New Truth broadcast her death. (It’s a staggering scene that allows the madness of “Hellbound” to grow tenfold.) Min Hyejin has a surprising and heavily rewarding character arc, as many people do in this top-tier ensemble—along with how the series jumps time, it’s never certain where a character will be in the next episode, or if they’ll return. 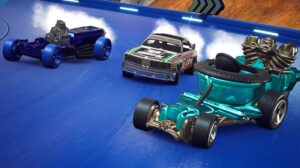