Popular Los Angeles rapper Drakeo the Ruler has died after being stabbed at the Once Upon A Time In LA music festival, last night, MTO News has confirmed.

The 28-year-old, whose real name was Darrell Caldwell, passed away in hospital after being attacked at the popular music festival.

And Drakeo isn’t the only person to have been attacked at the event. According to multiple sources, Drakeo’s manager – the popular hip hop mogul Wack100 was jumped by a group of goons.

So what happened? Well MTO News is hearing that Drakeo and Wack100 are affiliated with one major Los Angeles gang. The attackers were members of a rival gang.

And the rival gang members managed to make it onto the stage during the festival – and attack their opps, in front of the entire crowd.

Here’s video of the fight that killed Drakeo:

And here’s video of EMS workers trying to save Drakes.

MTO News confirmed that Wack100 was attacked on stage, but managed to fight off most  this attackers. Drakeo wasn’t as lucky. The fight spilled from the stage to backstage, and that’s where Durkeo was stabbed once in the throat.

Lil Durk Proposes To India On Stage – Look At The Ring

The LA Police Department previously confirmed that the rap star suffered severe stab wounds to the neck after he was set upon by a “group of people” in an area off stage.

Thus far, no arrests have been made, according to The Los Angeles Times.

Drakeo had been due to perform at the Los Angeles festival alongside stars such as Snoop Dogg, Ice Cub and 50 Cent . 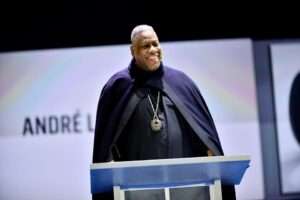