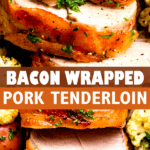 Bacon Wrapped Pork Tenderloin is an easy dinner that all pork fans must try! Juicy pork tenderloin is wrapped in tender slices of bacon and seasoned with sweet brown sugar. Every single bite of this baked pork is a delicious treat!

9 times out of 10, when you see the words ‘bacon wrapped,’ you know that whatever follows is going to be good. I’m happy to report that this Bacon Wrapped Pork Tenderloin recipe is no exception!

That’s right – one dinner, one pan! When you make this juicy pork tenderloin, you can save yourself from some serious post-dinner dish-washing time, too.

Okay, quick recap before we go on: Sweet bacon wrapped pork tenderloin that the whole family will love, plus easy clean up, and all in one pan? Sounds like a good deal to me!

Roasting the veggies adds a few more ingredients to the counter though, so here’s the full list of everything you’ll need to round up:

Bacon wrapped pork tenderloin sounds like it would take a while to put together, but it really doesn’t. This baked pork tenderloin is actually one of my go-to quick “fancy” dinner recipes. It’ll take you 15 minutes, tops, to prep the entire meal. Less, if you’ve chopped the veggies ahead of time. 🙂

Here’s how to put it together:

See what I mean about simple?

Here are a couple of tips and suggestions to make this bacon wrapped pork tenderloin recipe even easier:

It’s totally fine to serve this pork tenderloin with just the pan-roasted vegetables, but there are other sides that you can include as well, if desired:

How to Store and Reheat Leftovers

Can I Freeze Extras?

Juicy pork tenderloin wrapped with bacon and rubbed with a brown sugar mixture, then roasted with potatoes, cauliflower, and broccoli.

* Percent Daily Values are based on a 2000 calorie diet.

Want To Save This Recipe?

Register For This Site

You will receive an email containing a link to set your password.

Wondering where to find some more pork dinner ideas? I’ve got a few for you: 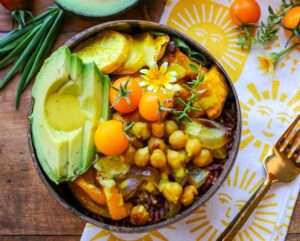 The 10 Most Popular Plant-Based Recipes