The multi-hyphenate artist released his self-titled fifth album last week and “Is There Any Love?” immediately stood out as the most uptempo, feel-good track. Twin Shadow repeatedly questions “is there any love” as the layered production builds into a funky instrumental bridge just over two minutes in. — Lyndsey Havens

Last week the final installment in Australian rapper-singer Tkay Maidza’s Last Year Was Weird trilogy arrived — and it didn’t disappoint. “High Beams” in particular showcases all the 25-year-old can do vocally and best spotlights the more intricate and hard-hitting production she gravitates toward, from the opening choir to the thumping bass. — L.H.

Charlotte Day Wilson and BADBADNOTGOOD, “I Can Only Whisper”

For Omar Apollo’s latest single, the alternative-indie artist tapped Chromeo and Carter Lang (SZA) to co-produce, resulting in a laid-back groover that encourages listeners to sway along as Apollo shocks with his stellar falsetto. — L.H.

Nashville country-pop singer-songwriter Emily Weisband teamed up with Little Big Town’s Karen Fairchild for this stunning ballad about what happens when the butterflies of a new love fly away — do you stick around, or move on? By the end of the song, the pair’s voices and production swell as if creating the effect of the butterflies finally being released. — L.H.

With staccato synths, a mesmerizing melody and a flute-like riff that might’ve come from Link in Ocarina of Time, “I Go” is a gently relentless thumper from Berlin-based DJ Peggy Gou. It never quite throws down, but never lets up, either; perfect for keeping the party going when you’ve sweat out a few gallons on the dancefloor but aren’t ready to call it quits just yet. – Joe Lynch

Reflective, often tormented Philly rapper Lil Uzi Vert might not seem like the obvious choice for a 2021 update on Technotronic’s hip-house staple “Pump Up the Jam,” but his skittering, laid-back trap take on the Jock Jams classic for the Space Jam: A New Legacy soundtrack is surprisingly winning — and particularly charming when he earnestly asks, “How I end up in Space Jam?” – J.L.

Capitalizing on the viral success of his online mashups, Amorphous brings together two all-time vocal pros, Kelly Rowland and CeCe Peniston, for an update on the latter’s house classic “Finally.” It feels less like a flex and more like a well-deserved victory lap, not to mention a tantalizing promise of things to come now that he’s shifted his career into a higher gear. – J.L.

A strummy, sing-song slapper, “Hotel” is Claire Rosinkranz’s sweet ode to hanging out with friends in a hotel room while being “17 and idiots [who] play truth or dare.” A brisk two minutes, it’s as refreshing as a fizzy soda after a swim on a hot summer’s day. – J.L. 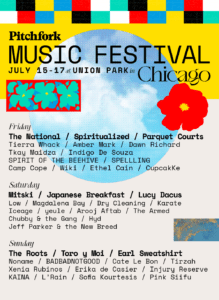