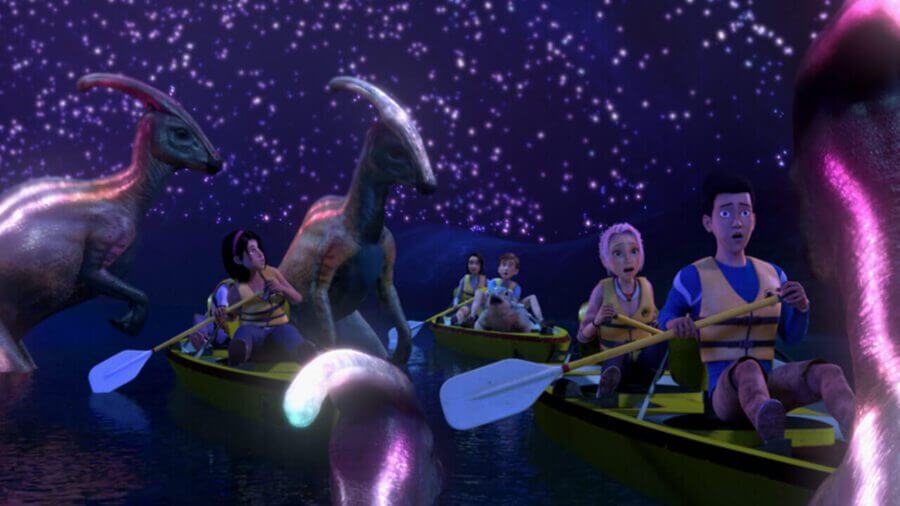 Developed by Zack Stentz with executive producer, Steven Spielberg on board, the new Netflix series explores one of the biggest Universal properties in the form of Jurassic Park. It comes months after Netflix adapts another Universal license, Fast & Furious (season 2 hitting in October 2020).

The series touched down on Netflix on September 18th, 2020 alongside Ratched season 1.

Jurassic Park: Camp Cretaceous arrives on Netflix as part of the expansive Dreamworks TV deal that Netflix has had since 2016 kicking off with All Hail King Julien. That deal, however, is beginning to end as Dreamworks now works on projects for Hulu, Peacock, and Apple TV+.

The two final shows to come to Netflix as part of the deal (excluding new seasons or updates to previous properties) include Gabby’s Dollhouse and Go, Dog. Go! that are due to release at some point in 2020.

Originally, we predicted that we wouldn’t actually hear about any future season announcements due to the way Netflix and Dreamworks typically leave it until the month before to drop a new season.

However, in this instance we were wrong and on October 9th, an official post from the Jurassic World social media accounts confirmed new episodes would arrive in 2021.

A new season of survival begins in 2021. All new episodes of Jurassic World: Camp Cretaceous, coming soon to @netflix. pic.twitter.com/kzag0fsgYl

As for how many seasons there will be in total, that’s still up in the air.

Netflix typically orders a batch of episodes upfront (7 seasons for example in the case of Dragons). With that said, we’ve never heard of any official number for Jurassic World.

As for when we can expect it. New seasons of Dreamworks titles have arrived sometimes three months down the, sometimes six or sometimes even up to a year later (in the case of Tales of Arcadia for example).

Our guess would be somewhere between the first two options between three and six months which could mean as soon as January 2021 but more realistically would be any time in Q1-Q2 2021.

Do you want to see more episodes of Netflix’s Jurassic Park: Camp Cretaceous? Let us know in the comments down below.