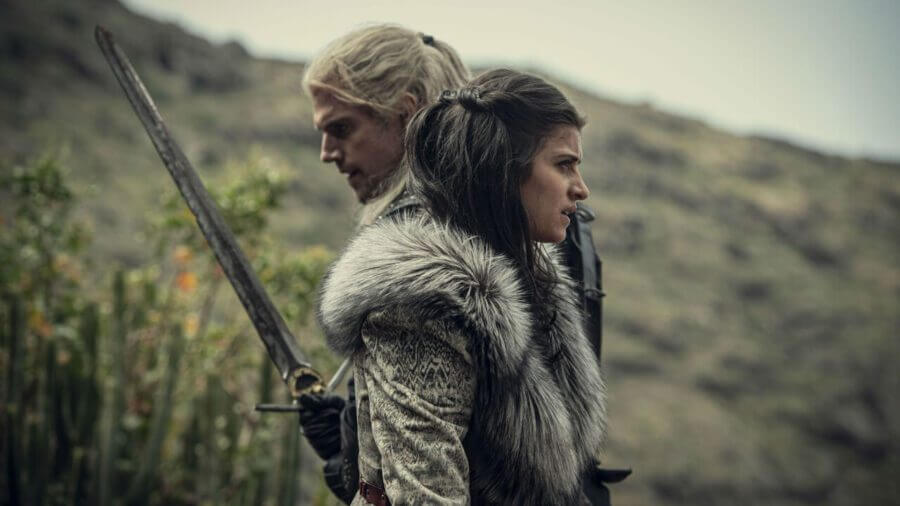 2020 is finally over, and most of us are happy to leave it behind. One thing can be said in favor of 2020, however: it was a fantastic year for Witcher news. Beginning with the later-confirmed rumor that Game of Thrones’ Kristofer Hivju was joining the cast, through various leaks and paparazzi photographs, to the reveal of not one but two spinoffs set in the “Witcher Cinematic Universe”, it’s been quite the year.

December of 2020 was no exception in that regard, as we were showered with news of Netflix’s fantasy franchise. We’ve recapped the month’s biggest stories in the article below, including photos of Henry Cavill riding to battle in Geralt’s new armor, casting news, a blooper reel from season one and a major spoiler regarding Anya Chalotra’s Yennefer. 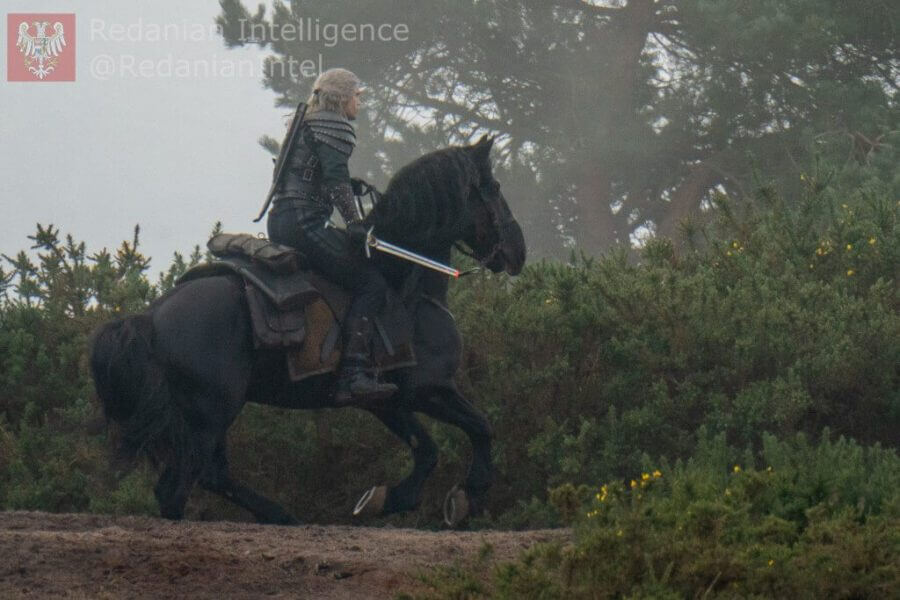 Henry Cavill on Roach in season 2 of The Witcher – Picture: Redanian Intelligence

Towards the end of November, Henry Cavill was photographed while riding a black horse and wearing Geralt of Rivia’s brand new season two armor. In the above picture, Cavill can be seen charging forward with his steel sword drawn, on his way to intercept a squad of Nilfgaardian soldiers. As always, Henry Cavill is pulling it off (and take a look at this article for the full gallery of photos).

As was the case in The Witcher’s first season, Cavill seems keen to undertake all the stunt work for the character himself. This includes not only sword fights, but other stunts as well. On one such occasion first reported by The Sun, Cavill suffered a minor leg injury which forced the production to reshuffle the schedule and enter the Christmas break a few days earlier than expected. We hope that Cavill has healed sufficiently and is once again preparing for season two, as filming is expected to begin later this month (if Covid will allow it).

The scene in the above picture was filmed in the rolling hills near Frensham Little Pond in England. Besides Cavill, the series’ two other leading stars Anya Chalotra (who plays the magnetic sorceress Yennefer of Vengerberg) and Freya Allan (the exiled princess marked by destiny) were also filming nearby. Unfortunately, no high-quality pictures of The Witcher’s leading women were taken, but we do have a transcript of the dialogue from their scene, which we left at the end of this article due to major spoilers. 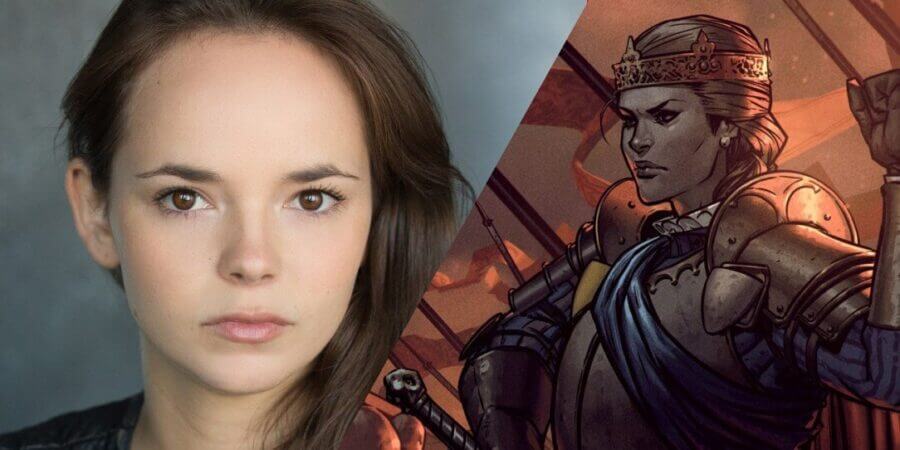 Best known for her charismatic portrayal in the videogame Thronebreaker: The Witcher Tales, Queen Meve of Rivia and Lyria is by far the fandom’s favorite monarch. In the novels, Meve is depicted as a sharp-minded leader and a capable warrior, having led her armies to many battles with Nilfgaard. As we uncovered towards the end of November, Meve will be portrayed by Enola Holmes actress and stunt woman Rebecca Hanssen.

In addition to her role as Millie Bobby Brown’s stunt double in Enola Holmes, Hanssen has featured in various films and television shows including Amazon’s Lore. Her stunt experience will no doubt come into play in later seasons, when Meve will once again heed the call of battle. We can’t wait to see her in action!

We have also uncovered the casting of several minor roles (including one which confirms a theory that places sex workers in Kaer Morhen) and a few other actors with as yet unknown roles. Perhaps the most interesting of them all is the casting of Alastair Parker, who may well be the show’s Sigismund Dijkstra (he certainly fits the physical description). Parker is already familiar with the Continent, having voiced various characters in The Witcher III: Wild Hunt. 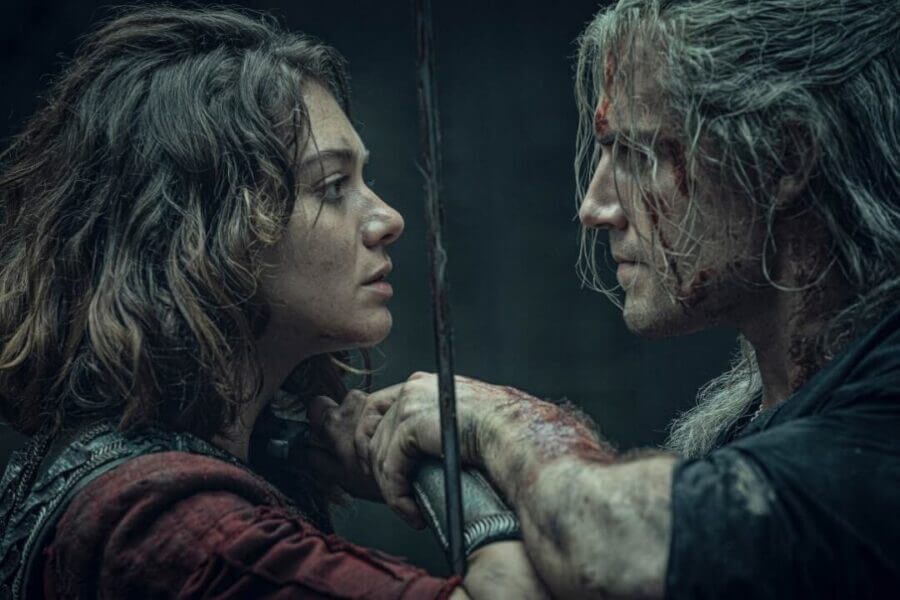 Even before The Witcher aired its first season, the fight scene in the market of Blaviken had become a trademark moment of the series. Featuring Henry Cavill’s best sword fighting yet, the scene was beautifully choreographed by Mission Impossible’s Wolfgang Stegemann during reshoots of the series’ pilot. Until very recently, Stegemann’s busy schedule (filming Mission Impossible) has prevented him from reuniting with Henry Cavill on the Witcher set – that is until last year’s final weeks of filming.

As we reported at Redanian Intelligence, Stegemann was confirmed to be on location at Bourne Woods with Henry Cavill and director Stephen Surjik (who helms the season’s first and second episodes). It appears that Surjik and Stegemann were reshooting a key fight scene from the season’s second episode, featuring Geralt, Ciri, and several witchers that will be introduced in season two.

After filming wrapped in Bourne Woods, production relocated to Arborfield Studios, where Stegemann was joined by the same actors and likely continued filming this fight sequence. Fans have speculated that the fight may feature a particularly fearsome monster. This may have been the scene that Henry Cavill was filming when he was injured on set, but that remains unconfirmed.

Witchmas: All the news from The Witcher’s Christmas celebration 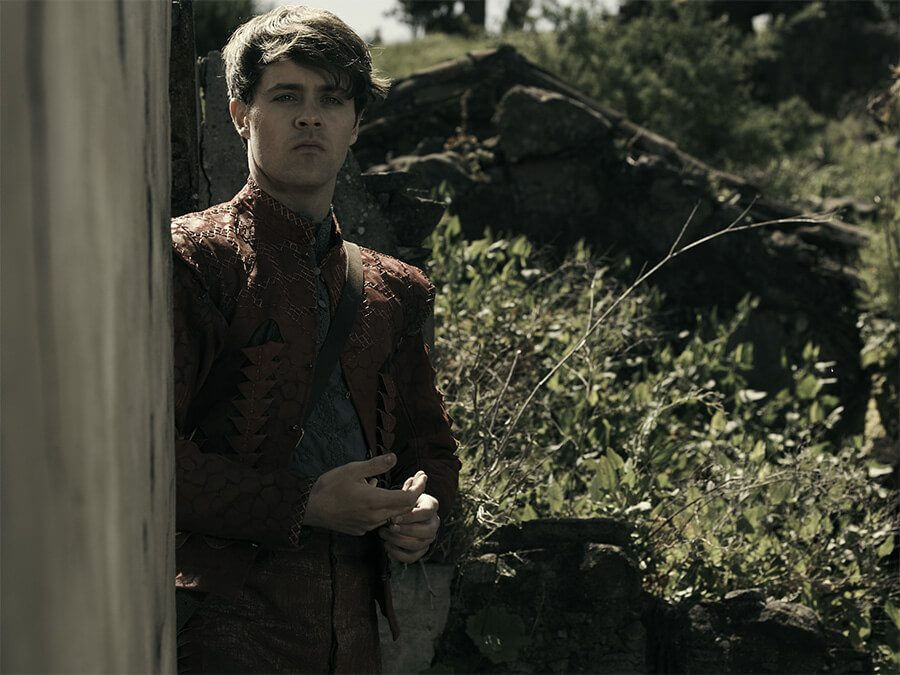 To cap the year, the show’s official Twitter account released a cavalcade of pictures, videos and treats, including season one bloopers, a tease of season two, a logo reveal for the animated film The Witcher: Nightmare of the Wolf and a Jaskier photoshoot. We’ve listed every one of #Witchmas gifts below:

Sent off a draft of the finale for The Witcher – Blood Origin today, co written with demon writer @Tasha3point0 That felt really fucking great. This room has been a dream.

Besides the above-mentioned spinoff, The Witcher: Nightmare of the Wolf, Netflix is already developing another spinoff show: a live-action limited series titled The Witcher: Blood Origin. This six-episode show will serve as a prequel to the main series, exploring the Continent’s history hundreds of years before Geralt meets Ciri and Yennefer, including fabled events such as the Conjunction of the Spheres and the creation of the first witcher.

In the above tweet, showrunner Declan de Barra reveals that the writers room for Blood Origin has completed their work. Meanwhile, the casting team led by The Witcher’s Sophie Holland are hard at work searching for the series’ stars. The casting breakdowns of two main characters have recently been revealed by Illuminerdi.

Eile “The Lark” Lithe is a woman in her late 20s to early 30s from a clan of Elves that uses knives as their primary weapon. The producers are looking for a diverse actor to play the role, especially one with a background in dance and stunt work. Fjall is about the same age as Eile. He is from an opposing clan – perhaps suggesting a conflict will ensue between rival elves. He is described as physically strong, raw, gritty, and visceral.

These two are joined by several other characters revealed in various stages of development, including the Continent’s first witcher. Earlier this year, it was rumored that Aquaman star Jason Momoa was being eyed for the role, though we still don’t know if Netflix were able to sign him on.

For a full recap of everything we know about Blood Origin, including the known characters and storylines, make sure to take a look at our Blood Origin recap article. 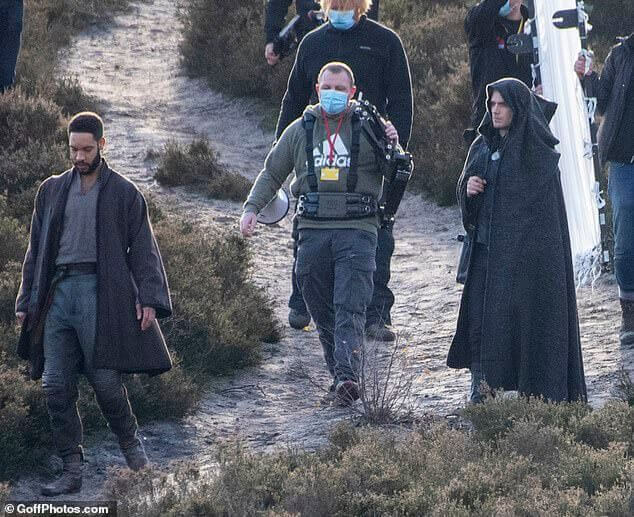 With that out of the way, we can return to leaks from the filming of the second season. Joining Henry Cavill, Freya Allan, and Anya Chalotra, other members of the series’ cast have also been spotted on location near Frensham Little Pond. Chief among them is Royce Pierreson, who portrays Yennefer’s past love interest and archeology enthusiast Istredd. Istredd was last seen declining Yennefer’s offer of reconciliation at a monolith excavation site in Nazair during the seventh episode of season one, and has yet to interact with Cavill’s Geralt of Rivia as he had in the short story A Shard of Ice.

Images from the set feature Geralt and Istredd traveling through the countryside, suggesting that this short story may yet be adapted in the Netflix series (though changes will have to be made, as A Shard of Ice happens in the books before Geralt meets Ciri). The scenes featuring Geralt and Istredd were pictured by various onlookers, and we have a gallery of photos featuring the location and extras in another article.

If you wish to avoid spoilers for season two, read no further.

A second scene featuring Geralt and Istredd was filmed on the beach of Frensham Little Pond. The scene was filmed at night, and several cast members joined Cavill and Pierreson for the shoot. These include Mecia Simson (season two’s elven sorceress Francesca), Kaine Zajaz (Francesca’s brother Gage), Tom Canton (King Filavandrel), and Wilson Radjou-Pujalte (Dara). An onlooker told us that Geralt had an altercation with one of the other characters (possibly an extra, or Gage), who “had information about Ciri of Cintra”. We’re interested to see what exactly is going on here, as this did not happen in Andrzej Sapkowski’s novels.

Spoiler Report: Anya Chalotra’s Yennefer and Freya Allan’s Ciri film a dramatic scene which signals a departure from the novels

Warning: there will be major spoilers for season two in this section of the article.

We’ve already discussed what Henry Cavill’s Geralt has been up to during filming of the second season, and now it’s time to discuss his co-stars. As has already been revealed through previously paparazzi photographs, Anya Chalotra’s Yennefer will join Freya Allan’s Ciri during the second season of The Witcher, as they do in the novels. We now have knowledge of a scene filmed in the hills near Frensham Little Pond, during which The Witcher’s leading ladies enter into a heated argument. We have a transcript of the dialogue spoken during the scene, provided to us by an onlooker who watched the cast and crew as they rehearsed and later filmed the scene.

Yennefer: “He is not here. He never was.”

Ciri: “You betrayed us. We were in trouble and needed your help.”

Yennefer: “I was selfish, stupid. Come with me, get the horses. Now!”

Readers of Sapkowski’s novels were surprised to read this transcript, as the scene does not appear in the books. Moreover, the Yennefer we know from the novels would not have betrayed Ciri and Geralt. It’s important to note that we don’t have the full context of this scene, and it’s unclear if Yennefer has really betrayed Ciri and Geralt or if this is just Ciri’s interpretation. Even if Yennefer really has betrayed Ciri, we don’t know what her intentions are: did she simply lie to Ciri about Geralt’s whereabouts? Did she do it to protect the young princess? It’s highly unlikely that she did it for personal gain.

In any case, the scene in question seems incredibly dramatic. As if that weren’t enough drama, the scene is followed by a confrontation with a group of Nilfgaardian soldiers. We believe Geralt’s scene discussed in the first section of this article (where he charges to battle on a black horse) belongs to this same sequence, as it was filmed in the same area. If that is indeed the case, then Yennefer and Ciri will be attacked by Nilfgaardians, and Geralt will come to the rescue (though to be fair, Ciri and Yen can handle themselves just fine).

We don’t know exactly which episode this scene will feature in, but it’s not a stretch to assume this will happen in the season finale. A reunion of the entire Witcher family, a possible betrayal, and a battle against Nilfgaard would be an exciting way to cap off a season based on the rather slow-paced novel Blood of Elves.

For more details and pictures of the crew filming on location (including a look at Ciri and the Nilfgaardians in their new armor), check out the full Redanian report.

With 2020 behind us, we’re looking forward to another year full of Witcher news! The show’s second season is expected to release this summer, though it may suffer another delay in light of the recent rise of Covid cases in the UK. Before season two, we expect to hear more about the animated film The Witcher: Nightmare of the Wolf.