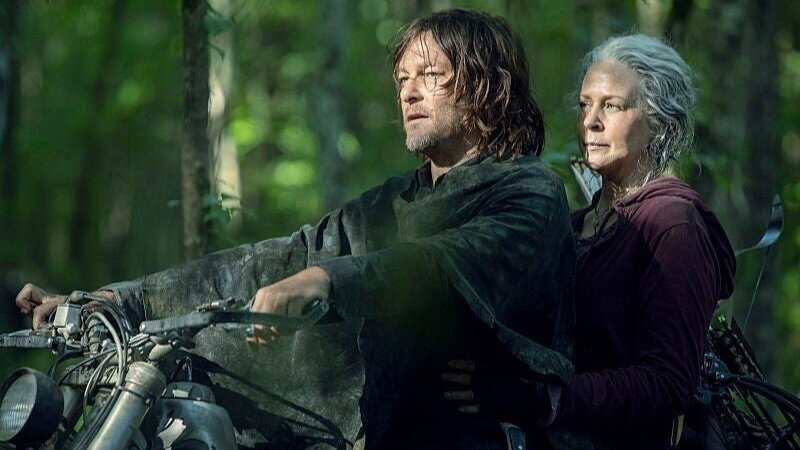 We are nearing a crossroads in the world of The Walking Dead, with fans finally getting to see the Season 10 finale this Sunday, as well as the beginning of the new series The Walking Dead: World Beyond, and next year, an extended and final 11th season before branching off to new endeavors. It was recently revealed that the show’s flagship series would end after Season 11 wraps in 2022, but we have two seasons of World Beyond, which will lead into the Rick Grimes story film, as well as the recently announced anthology series, and the Daryl/Carol spinoff.

There’s a lot to look forward to, and a lot of change heading our way. Co-creator Scott Gimple made statements about the new Daryl/Carol series in this past weekend’s Walking Dead Universe Preview Special on AMC, saying the best friends will discover a “new frontier of story and purpose. The next chapter with Daryl and Carol will be of a great deal about discovery. A new world, a new tone, a new frontier of story and purpose — all while carrying the lessons learned from the people who have made up their apocalypse family, their hard-won victories, and painful losses.”

It said the pair “might finally be comfortable enough in their own skins, and I don’t mean in the Alpha kind of way,” referring to the now dead leader of the whisperers. But in true Walking Dead form, Gimple continued, “Rest assured, we will be throwing a hell of a lot at them to make them uncomfortable. But there is an incredible 30 episodes ahead of heroism and horror that completely re-contextualize the world of the Walking Dead and set the stage for all that’s to come. With Daryl, Carol, and the stories alongside theirs — hopefully with a lot of the faces you’re seeing on the screen right now. There’s a universal story ahead. The Walking Dead lives.”

It sounds like they have a pretty clear vision for where to take the two characters, played by Norman Reedus and Melissa McBride, who are arguably the two most beloved characters on the show. The two have been around since Season 1 and have had a hell of a journey getting to where they are now. It will be exciting to see where the road leads them in the season to come.

Are you excited for all the new changes and stories coming to The Walking Dead?