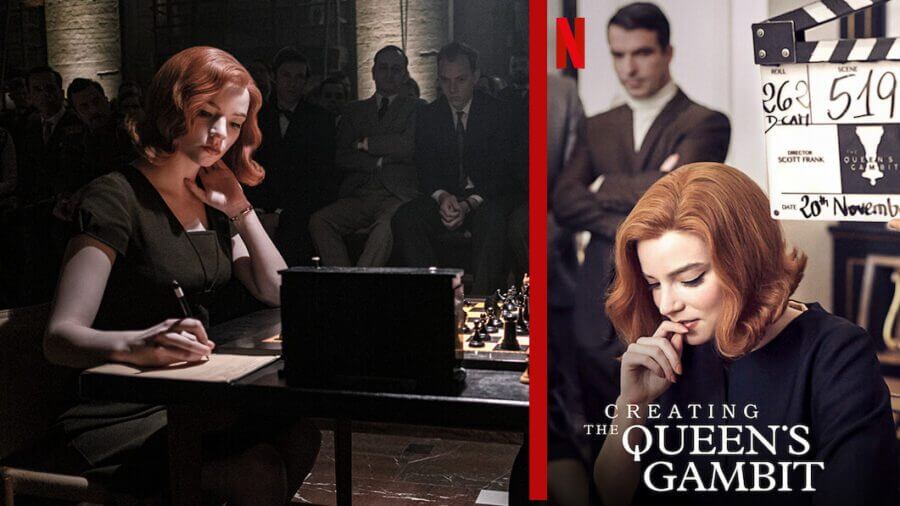 The series, which released on Netflix globally on October 23rd in 2020, has gone onto become Netflix’s biggest limited series ever and is cited in a general rise in interest in chess in recent months.

Although a second season is highly unlikely (although expect Netflix to commission more of Scott Franks’s work in the future) Netflix has now given us a bonus treat in the form of a 15-minute making-of documentary.

Despite the disappointing low runtime, the doc packs a lot of punch and covers the series development with interviews with Scott Frank and Allan Scott (who both served as the showrunners) as well as Anya Taylor-Joy who played the role of Beth Harmon.

Beyond those interviews, lots of other production staff give their thoughts on the series including Sabine Schaaf who served as set decorator, Uli Hanisch as production designer, and Alex Lambriev as prop master.

It also features testimony from chess experts such as Bruce Pandolfini.

Here’s how Netflix describes the doc:

“A fascinating character. Exquisite sets. A wig for every era. The stars, creators and crew reveal how the hit series about a chess prodigy came to life.”

For die-hard fans of the series, the chances are you’ve already watched this documentary. It was uploaded to Netflix’s Film Club YouTube channel on December 10th and has accumulated 1.865M views thus far. It remains available there even with its inclusion on Netflix so if you’ve since dropped your subscription, you can still watch it.

Speaking of Netflix’s Film Club channel, they also have some other goodies for The Queen’s Gambit fans. That includes your typical listicles such as 10 things you missed and what to watch next.

Creating The Queen’s Gambit can be found on Netflix globally either by searching or using this direct link.

Will you be watching the new documentary for The Queen’s Gambit on Netflix? Let us know in the comments down below.