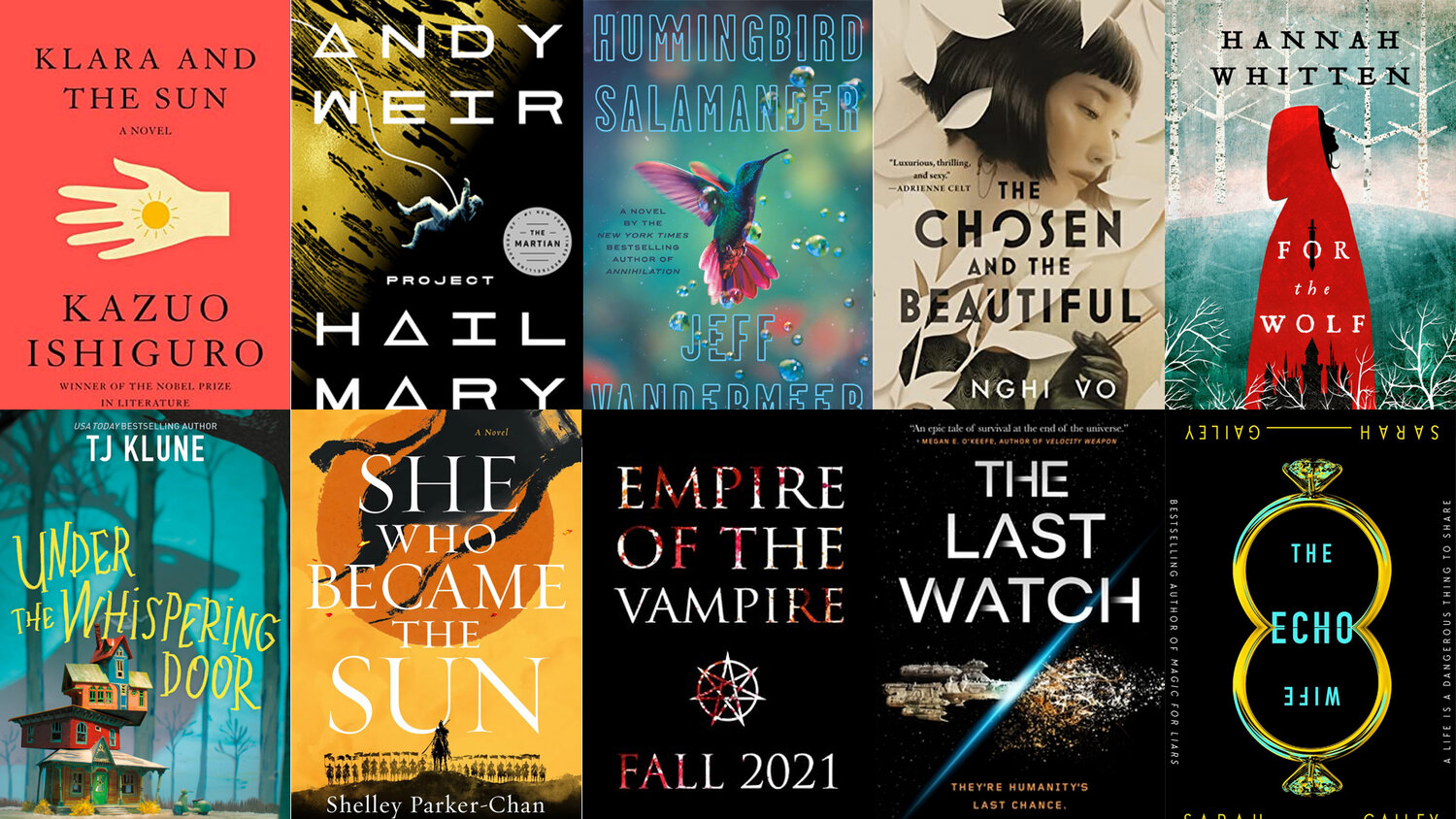 It’s a new year which means that a lot of new books are going to be releasing. Goodreads has done some algorithm magic or something like that and has compiled a list of most anticipated books for the entire year of 2021 for me to share with all of you. All of the books fit in either the sci-fi or fantasy genre and the one big caveat is that the list does not include any books that belong to a series. This means that a fair number of books were disqualified to begin with, but it also means that you don’t have to worry about getting caught up on a series before diving into the new books on the list. What are your most anticipated books for 2021?

Klara and the Sun

Klara and the Sun, the first novel by Kazuo Ishiguro since he was awarded the Nobel Prize in Literature, tells the story of Klara, an Artificial Friend with outstanding observational qualities, who, from her place in the store, watches carefully the behavior of those who come in to browse, and of those who pass on the street outside. She remains hopeful that a customer will soon choose her.

Klara and the Sun is a thrilling book that offers a look at our changing world through the eyes of an unforgettable narrator, and one that explores the fundamental question: what does it mean to love?

Ryland Grace is the sole survivor on a desperate, last-chance mission–and if he fails, humanity and the earth itself will perish.

Except that right now, he doesn’t know that. He can’t even remember his own name, let alone the nature of his assignment or how to complete it.

All he knows is that he’s been asleep for a very, very long time. And he’s just been awakened to find himself millions of miles from home, with nothing but two corpses for company.

His crewmates dead, his memories fuzzily returning, he realizes that an impossible task now confronts him. Alone on this tiny ship that’s been cobbled together by every government and space agency on the planet and hurled into the depths of space, it’s up to him to conquer an extinction-level threat to our species.

And thanks to an unexpected ally, he just might have a chance.

Part scientific mystery, part dazzling interstellar journey, Project Hail Mary is a tale of discovery, speculation, and survival to rival The Martian–while taking us to places it never dreamed of going.

Security consultant “Jane Smith” receives an envelope with a key to a storage unit that holds a taxidermied hummingbird and clues leading her to a taxidermied salamander. Silvina, the dead woman who left the note, is a reputed ecoterrorist and the daughter of an Argentine industrialist. By taking the hummingbird from the storage unit, Jane sets in motion a series of events that quickly spin beyond her control.

Soon, Jane and her family are in danger, with few allies to help her make sense of the true scope of the peril. Is the only way to safety to follow in Silvina’s footsteps? Is it too late to stop? As she desperately seeks answers about why Silvina contacted her, time is running out—for her and possibly for the world.

The Chosen and the Beautiful

Jordan Baker grows up in the most rarefied circles of 1920s American society—she has money, education, a killer golf handicap, and invitations to some of the most exclusive parties of the Jazz Age. She’s also queer, Asian, adopted, and treated as an exotic attraction by her peers, while the most important doors remain closed to her.

But the world is full of wonders: infernal pacts and dazzling illusions, lost ghosts and elemental mysteries. In all paper is fire, and Jordan can burn the cut paper heart out of a man. She just has to learn how.

Nghi Vo’s debut novel The Chosen and the Beautiful reinvents this classic of the American canon as a coming-of-age story full of magic, mystery, and glittering excess, and introduces a major new literary voice.

As the only Second Daughter born in centuries, Red has one purpose-to be sacrificed to the Wolf in the Wood in the hope he’ll return the world’s captured gods.

Red is almost relieved to go. Plagued by a dangerous power she can’t control, at least she knows that in the Wilderwood, she can’t hurt those she loves. Again.

But the legends lie. The Wolf is a man, not a monster. Her magic is a calling, not a curse. And if she doesn’t learn how to use it, the monsters the gods have become will swallow the Wilderwood-and her world-whole.

Under the Whispering Door

When a reaper comes to collect Wallace Price from his own funeral, Wallace suspects he really might be dead.

Instead of leading him directly to the afterlife, the reaper takes him to a small village. On the outskirts, off the path through the woods, tucked between mountains, is a particular tea shop, run by a man named Hugo. Hugo is the tea shop’s owner to locals and the ferryman to souls who need to cross over.

But Wallace isn’t ready to abandon the life he barely lived. With Hugo’s help he finally starts to learn about all the things he missed in life.

When the Manager, a curious and powerful being, arrives at the tea shop and gives Wallace one week to cross over, Wallace sets about living a lifetime in seven days.

By turns heartwarming and heartbreaking, this absorbing tale of grief and hope is told with TJ Klune’s signature warmth, humor, and extraordinary empathy.

She Who Became the Sun

“I refuse to be nothing…”

In a famine-stricken village on a dusty yellow plain, two children are given two fates. A boy, greatness. A girl, nothingness…

In 1345, China lies under harsh Mongol rule. For the starving peasants of the Central Plains, greatness is something found only in stories. When the Zhu family’s eighth-born son, Zhu Chongba, is given a fate of greatness, everyone is mystified as to how it will come to pass. The fate of nothingness received by the family’s clever and capable second daughter, on the other hand, is only as expected.

When a bandit attack orphans the two children, though, it is Zhu Chongba who succumbs to despair and dies. Desperate to escape her own fated death, the girl uses her brother’s identity to enter a monastery as a young male novice. There, propelled by her burning desire to survive, Zhu learns she is capable of doing whatever it takes, no matter how callous, to stay hidden from her fate.

After her sanctuary is destroyed for supporting the rebellion against Mongol rule, Zhu uses takes the chance to claim another future altogether: her brother’s abandoned greatness.

Empire of the Vampire

Twenty-seven years have passed since the last sunrise, and for almost three decades, the creatures of the night have walked the day without fear. Once, humanity fought bravely against the coldblood legions, but now, we exist only in a few scattered settlements—tiny sparks of light in a growing sea of darkness.

Gabriel de León is the last of the Silversaints, a holy order dedicated to defending realm and church, now utterly destroyed. Imprisoned for the murder of the vampiric king, Gabriel is charged with telling the story of his life.

His tale spans years, from his youth in the monastery of San Michon, to the forbidden love that spelled his undoing, and the betrayal that saw his order annihilated. Most importantly, Gabriel will tell the story of the Grail—the legendary cup prophesied to bring an end to the eternal night, whose location is known to a single person: A smart-mouthed teenage urchin named Dior.

Their journey with a band of unlikely allies would see Dior and Gabriel forge an unbreakable bond, and set the broken paragon on a road to redemption.

But now, the Grail is shattered. And with the cup of the Redeemer destroyed and the last Silversaint awaiting execution, what can bring an end to this undying empire?

It’s the edge of the universe.

Now it’s collapsing—and taking everyone and everything with it.

The only ones who can stop it are the Sentinels—the recruits, exiles, and court-martialed dregs of the military.

At the Divide, Adequin Rake, commanding the Argus, has no resources, no comms—nothing, except for the soldiers that no one wanted.

Martine is a genetically cloned replica made from Evelyn Caldwell’s award-winning research. She’s patient and gentle and obedient. She’s everything Evelyn swore she’d never be.

And she’s having an affair with Evelyn’s husband.

Now, the cheating bastard is dead, and the Caldwell wives have a mess to clean up.

Good thing Evelyn Caldwell is used to getting her hands dirty

When they said all happy families are alike, this can’t be what they meant…