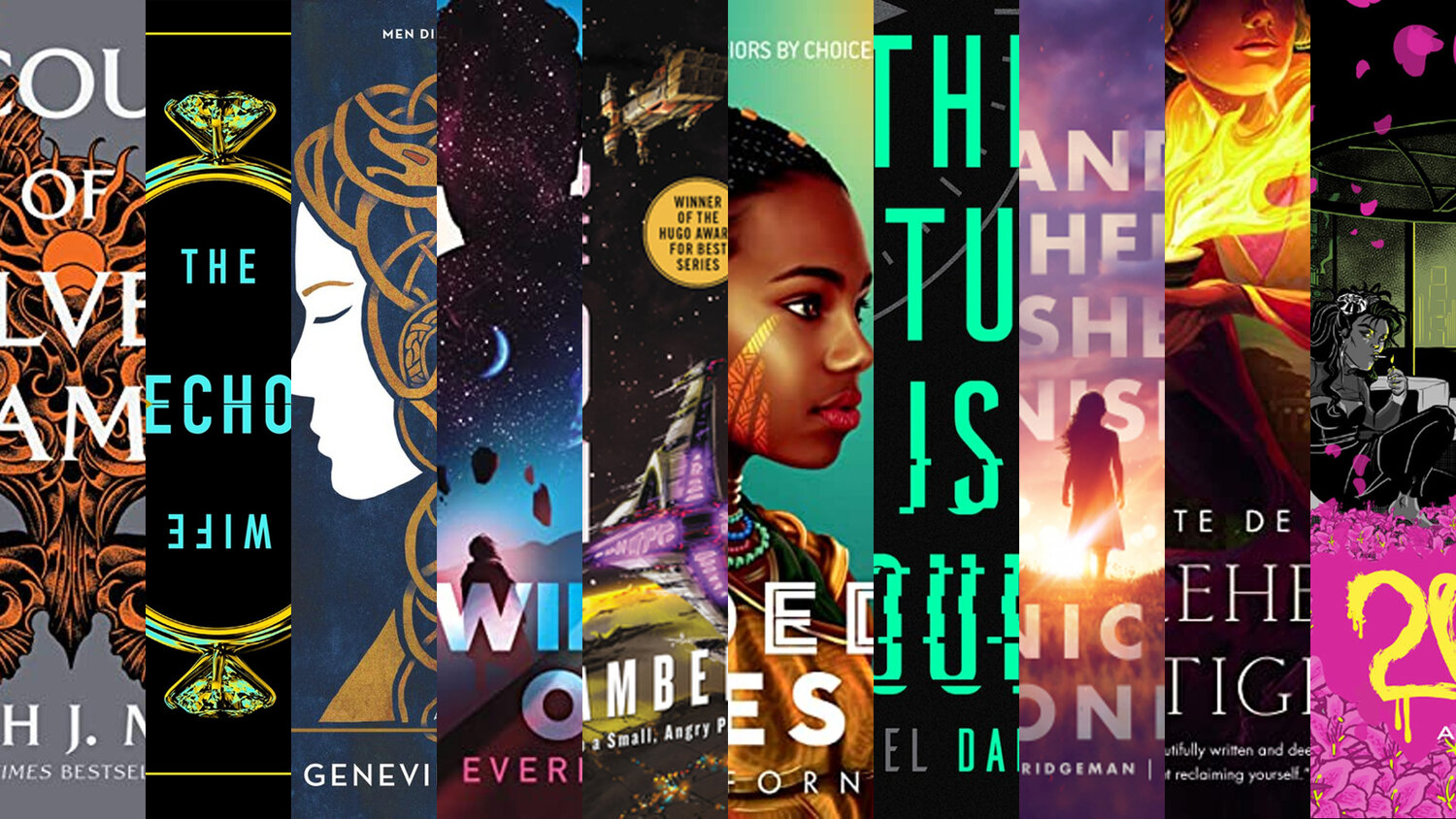 I know I’m a little late on this one, but I now have the list of the most anticipated sci-fi and fantasy books for the month of February. As always, this list is according to Goodreads Members. What are you most excited to read this month?

A Court of Silver Flames

Nesta Archeron has always been prickly-proud, swift to anger, and slow to forgive. And ever since being forced into the Cauldron and becoming High Fae against her will, she’s struggled to find a place for herself within the strange, deadly world she inhabits. Worse, she can’t seem to move past the horrors of the war with Hybern and all she lost in it.

The one person who ignites her temper more than any other is Cassian, the battle-scarred warrior whose position in Rhysand and Feyre’s Night Court keeps him constantly in Nesta’s orbit. But her temper isn’t the only thing Cassian ignites. The fire between them is undeniable, and only burns hotter as they are forced into close quarters with each other.

Meanwhile, the treacherous human queens who returned to the Continent during the last war have forged a dangerous new alliance, threatening the fragile peace that has settled over the realms. And the key to halting them might very well rely on Cassian and Nesta facing their haunting pasts.

Against the sweeping backdrop of a world seared by war and plagued with uncertainty, Nesta and Cassian battle monsters from within and without as they search for acceptance-and healing-in each other’s arms.

Martine is a genetically cloned replica made from Evelyn Caldwell’s award-winning research. She’s patient and gentle and obedient. She’s everything Evelyn swore she’d never be. And she’s having an affair with Evelyn’s husband.

Now, the cheating bastard is dead, and the Caldwell wives have a mess to clean up. Good thing Evelyn Caldwell is used to getting her hands dirty.

Angrboda’s story begins where most witches’ tales end: with a burning. A punishment from Odin for refusing to provide him with knowledge of the future, the fire leaves Angrboda injured and powerless, and she flees into the farthest reaches of a remote forest. There she is found by a man who reveals himself to be Loki, and her initial distrust of him transforms into a deep and abiding love.

Their union produces three unusual children, each with a secret destiny, who Angrboda is keen to raise at the edge of the world, safely hidden from Odin’s all-seeing eye. But as Angrboda slowly recovers her prophetic powers, she learns that her blissful life—and possibly all of existence—is in danger.

With help from the fierce huntress Skadi, with whom she shares a growing bond, Angrboda must choose whether she’ll accept the fate that she’s foreseen for her beloved family…or rise to remake their future. From the most ancient of tales this novel forges a story of love, loss, and hope for the modern age.

While the Iskat Empire has long dominated the system through treaties and political alliances, several planets, including Thea, have begun to chafe under Iskat’s rule. When tragedy befalls Imperial Prince Taam, his Thean widower, Jainan, is rushed into an arranged marriage with Taam’s cousin, the disreputable Kiem, in a bid to keep the rising hostilities between the two worlds under control.

But when it comes to light that Prince Taam’s death may not have been an accident, and that Jainan himself may be a suspect, the unlikely pair must overcome their misgivings and learn to trust one another as they navigate the perils of the Iskat court, try to solve a murder, and prevent an interplanetary war… all while dealing with their growing feelings for each other.

The Galaxy, and the Ground Within

With no water, no air, and no native life, the planet Gora is unremarkable. The only thing it has going for it is a chance proximity to more popular worlds, making it a decent stopover for ships traveling between the wormholes that keep the Galactic Commons connected. If deep space is a highway, Gora is just your average truck stop.

At the Five-Hop One-Stop, long-haul spacers can stretch their legs (if they have legs, that is), and get fuel, transit permits, and assorted supplies. The Five-Hop is run by an enterprising alien and her sometimes helpful child, who work hard to provide a little piece of home to everyone passing through.

When a freak technological failure halts all traffic to and from Gora, three strangers—all different species with different aims—are thrown together at the Five-Hop. Grounded, with nothing to do but wait, the trio—an exiled artist with an appointment to keep, a cargo runner at a personal crossroads, and a mysterious individual doing her best to help those on the fringes—are compelled to confront where they’ve been, where they might go, and what they are, or could be, to each other.

Sixteen-year-old Deka lives in fear and anticipation of the blood ceremony that will determine whether she will become a member of her village. Already different from everyone else because of her unnatural intuition, Deka prays for red blood so she can finally feel like she belongs.

But on the day of the ceremony, her blood runs gold, the color of impurity–and Deka knows she will face a consequence worse than death.

Then a mysterious woman comes to her with a choice: stay in the village and submit to her fate, or leave to fight for the emperor in an army of girls just like her. They are called alaki–near-immortals with rare gifts. And they are the only ones who can stop the empire’s greatest threat.

Knowing the dangers that lie ahead yet yearning for acceptance, Deka decides to leave the only life she’s ever known. But as she journeys to the capital to train for the biggest battle of her life, she will discover that the great walled city holds many surprises. Nothing and no one are quite what they seem to be–not even Deka herself.

The Future Is Yours

If you had the chance to look one year into the future, would you?

For Ben Boyce and Adhi Chaudry, the answer is unequivocally yes. And they’re betting everything that you’ll say yes, too. Welcome to The Future: a computer that connects to the internet one year from now, so you can see who you’ll be dating, where you’ll be working, even whether or not you’ll be alive in the year to come. By forming a startup to deliver this revolutionary technology to the world, Ben and Adhi have made their wildest, most impossible dream a reality. Once Silicon Valley outsiders, they’re now its hottest commodity.

The device can predict everything perfectly—from stock market spikes and sports scores to political scandals and corporate takeovers—allowing them to chase down success and fame while staying one step ahead of the competition. But the future their device foretells is not the bright one they imagined.

Ambition. Greed. Jealousy. And, perhaps, an apocalypse. The question is . . . can they stop it?

Told through emails, texts, transcripts, and blog posts, this bleeding-edge tech thriller chronicles the costs of innovation and asks how far you’d go to protect the ones you love—even from themselves.

And Then She Vanished

He only looked away for a second.

Still haunted by the disappearance of his little sister Amy over twenty years ago, Joseph Bridgeman’s life has fallen apart. When a friend talks him into seeing hypnotherapist Alexia Finch to help with his insomnia, Joseph accidentally discovers he can time travel. His first trip only takes him back a few minutes, but his new-found ability gives him something he hasn’t felt for the longest time: hope.

Joseph sets out to travel back to the night Amy went missing and save her. But after several failed attempts, he discovers the farther back he travels, the less time he gets to stay there. And the clock is ticking.

With the help of Alexia, Joseph embarks on a desperate race against the past to save his sister. Can he master his new skill and solve the myste

Fire burns bright and has a long memory….

Quiet, thoughtful princess Thanh was sent away as a hostage to the powerful faraway country of Ephteria as a child. Now she’s returned to her mother’s imperial court, haunted not only by memories of her first romance, but by worrying magical echoes of a fire that devastated Ephteria’s royal palace.

Thanh’s new role as a diplomat places her once again in the path of her first love, the powerful and magnetic Eldris of Ephteria, who knows exactly what she wants: romance from Thanh and much more from Thanh’s home. Eldris won’t take no for an answer, on either front. But the fire that burned down one palace is tempting Thanh with the possibility of making her own dangerous decisions.

Can Thanh find the freedom to shape her country’s fate—and her own?

But it’s not a celebration, more like a funeral. Eva lives in a world where the Cure for aging and illness has been discovered and administered to every person on Earth, only there’s one big hitch. It turns out that very few people can handle immortality, so they have to take a test on their two hundredth birthday. If they pass, then they get to live forever. But if they fail, they must be euthanized.

Eva’s not an optimist. In fact, she’s pretty sure that she’s going to fail her Centurial Assessment Test. For starters, almost nobody passes anymore. She’s seen the news stories. But than more than that, Eva can tell that she’s already starting to slip mentally. Ever since the Escorts took her husband Owen away for his test a little over six months ago and he never came back, she’s been chainsmoking cigarettes (they can’t kill her after all), binge drinking, and waiting for the Escorts to get it over with already.

Who wants to live forever if you have to do it alone?

Here’s the truth—Owen was her husband for over 170 years. He was her soulmate. Her lover. Her goofball best friend. Her partner in crime. Her everything. But on the way to her testing room, Eva glimpses a staffer who resembles her husband. Suddenly, she has to find out the truth about what really happened to him. Suddenly, she has a reason to live. Did he pass his test? Does he get to live forever? Can Eva join him for this next part of their lives? Or is she destined to fail her test and be euthanized?

Now Eva must escape from the testing facility and find out if her husband passed his test—and what he’s been doing for the past six months. With the Escorts hunting her down, she kidnaps the staffer and drags him to the roof, discovering that it’s Owen—only he can’t remember her because they wiped his memory. When you pass your CAT test, you must leave your old life behind. Eva must now find a way to him remember their life together, or lose him forever to his new immortal existence.