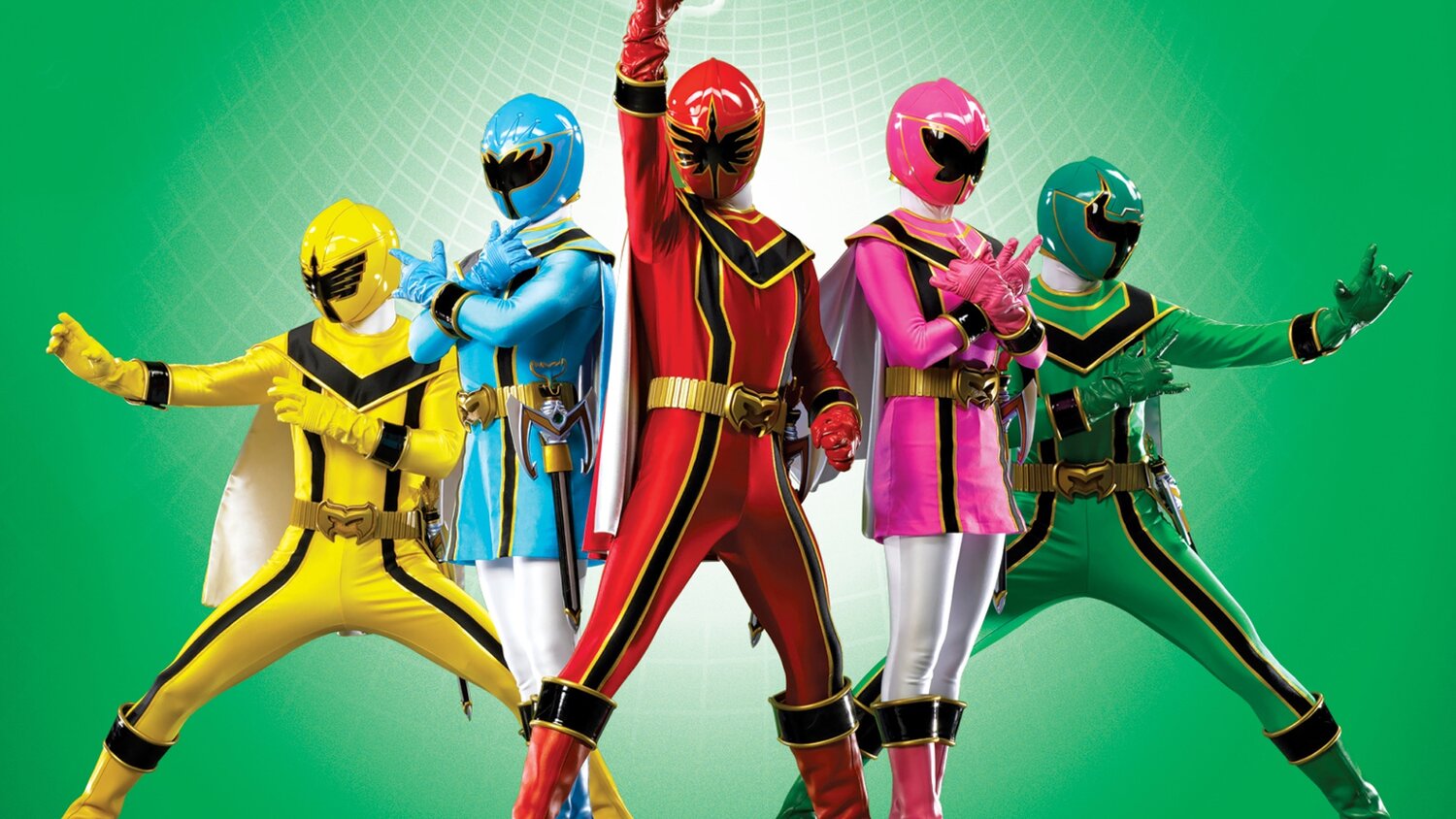 Oh my goodness. It took longer than I wanted, but I finally powered through this one. I have fully watched Power Rangers Mystic Force. This season is basically Harry Potter Power Rangers and is adapted from Mahou Sentai Magiranger. It originally aired in 2006 and features 32 episodes. After watching Power Rangers S.P.D. roughly one year ago, I did watch the first eight episodes before stopping and starting the entire franchise over from scratch. Those eight episodes were painful for me to watch. Well, I toughed through it this time and there’s a lot to talk about. Needless to say, I did not enjoy this season.

First, I want to say something important. First impressions do matter. I know that we like to pretend that they don’t matter to us, but they do to some extent. This season starts terribly. At roughly the five-minute mark, the Xenotome opens to tell Udonna (Peta Rutter) that the darkness has been unleashed and the acting is so bad. Her lines are so monotone and devoid of any emotion that it’s hard to believe she’s one of the good guys who’s genuinely worried about this. Udonna is supposed to be like the ultimate good this season, but she definitely doesn’t sound too concerned about the ultimate evil. This really set the tone for me and immediately told me this season was going to not be good, even by Power Rangers standards.

Another thing I want to talk about before really diving in is the soundtrack. I might be wrong, but I swear that a lot of the background music was just ripped from Heroes of Might & Magic III. Apparently Disney could not have cared enough to actually make music and decided to take the music from an amazing game and insert it into this dumpster fire. Power Rangers music can be really cool, but it really lost me when I kept hearing the same music as a classic game.

OK, let’s dive in now. This series goes back to the idea from Ninja Storm where we don’t know how old the Power Rangers are. They all work at a record store called the Rock Porium in the town of Briarwood. We start off with Charlie “Chip” Thorn (Nic Sampson), Madison “Maddie” (Melanie Vallejo), and Vida “Vi” Rocca (Angie Diaz), and Xander Bly (Richard Brancatisano) working for Toby Slambrook (Barnie Duncan). Then, Nick Russell (Firass Dirani) rolls into town on a motorcycle and eventually becomes friends with the rest of the gang and even works at the Rock Porium. All but Toby become the Mystic Force Rangers and join Udonna who is the White Ranger in the fight against evil. Over time, Daggeron (John Tui) joins as the Solaris Knight and Leanbow (Chris Graham) joins as the Wolf Warrior. Other important allies are Clare (Antonia Prebble), who is Udonna’s sorceress apprentice, and Phineas (Kelson Henderson), who is a Troblin in the magical forest.

The villains this season start as Morticon, Necrolai the Queen of the Vampires, and Koragg the Knight Wolf who have the goal of reviving Octomus the Master. Imperious, an ex-ally of Udonna’s who was previously known as Calindor, joins the party and that brings about some kind of interesting stuff with the Barbarian Beasts. At the end of the season though, we’ve got the Ten Terrors to worry about. The foot soldiers are called Hidiacs and Styxoids. The foot soldiers aren’t the worst, but they’re not my favorite either (go Quantrons!). One final character who starts as a villain is Leelee Pimvare (Holly Shanahan) who is Necrolai’s daughter.

This season is all about magic and wizards. The Rangers believe in magic in order to access their powers, they ride brooms which become hover bikes, their morphers were originally magic wands before being turned into cellphones, and it just keeps going on. It’s not terrible, although for some reason magic means the Rangers need capes and I don’t really like the look. I’m really not a fan of the Ranger outfits in general and the half-capes just don’t add anything. Also, Daggeron really raised a bunch of questions for me when he entered the picture. Udonna had to change the Rangers morphers into phones to blend in better with the modern era. However, Daggeron had no such need and was even trapped for a good long while. Why is it that when he shows up, his morpher is already updated? Also, why is he a train conductor? Why is it that apparently wizards aren’t allowed to move past the 1910s technologically speaking? I don’t understand that weird limitation. The first question is once again raised when Leanbow shows up with a cellphone morpher out the gate by the way. As a quick side note I do want to say that Daggeron’s Solaris Knight is actually pretty cool looking.

While I’m talking about morphers, I also want to address Spell Codes. Over the season, the Rangers unlock spell codes to do things like morph, turn into their Zords, and form the Megazords. What would this have looked like if they weren’t cellphones? Would they have had to wave the wands in different patterns or something? I don’t know why, but this bothers me.

Going back to Daggeron and Leanbow, they confused me. They had Ancient Mystic modes which really didn’t seem to do anything but also, there was a point where when they were defeated, they defaulted back to the Ancient Mystic modes instead of their human forms. That doesn’t make sense. They lose their power and energy, they should go to their basic human form. It’s weird.

Let’s revisit Udonna real quick. She’s worthless. I had high hopes for her despite the horrendous opening to the series because I keep seeing people talk about how they love the White Mystic Ranger. The White Mystic Ranger is in all of maybe five episodes and literally does nothing. She is able to defeat some Hidiacs and Styxoids, but whenever facing a big villain, she gets wrecked! Korrag then steals her Snow Staff at the start of the second episode, and she doesn’t get it back until the last few episodes. Even outside of being the White Ranger though, she doesn’t do a whole lot to help them. She’s mostly there to provide some exposition and serve as plot device when needed.

This season is full of weird stuff though. Korrag can use the Snow Staff to start a telepathic link with Nick somehow. At least some of the conclusions to the moral of the story moments don’t make a lot of sense. (Nick watches Maddie’s video highlighting her friends and no longer thinks she’s shy?) The Rangers get boxing gloves as a power up that they use in about two or three episodes. One of the monsters puts red marker mustaches on people and that’s a heinous crime. Oh, and in the penultimate episode Nick randomly is possessed by The Master for a brief bit of time. What!?

This season tried to pull some fast ones as well that were no surprise at all. I will admit that I didn’t see that Udonna was going to be married. However, I immediately put together that Korrag was her husband. Also, once we knew she had a kid, it didn’t take a rocket scientist to see that Nick was that kid even though he looks nothing like either of his parents.. I was surprised when it was revealed that Leelee was Necrolai’s daughter and that she and Phineas end up being a couple though.

The final complaint that I will talk about is the ending of the season. The Rangers end up losing their powers while fighting The Master because he eats all their magic when they try attacking him with it. Well, then the humans and the people of the magical world come together and give the Rangers their magic which makes no sense as it is, but then, they act like the human world and magical world have been at war with each other in some racist/classist feud when they really haven’t known about the other. Heck, up until the final episode, Clare, Daggeron, Phineas, Leanbow, and Udonna are the only humanoids we see even in the background of the magical world. I was convinced that there was no one even close to Rootcore and Briarwood, so where did these random people come from at the end? I digress. The finale is just very messy with how they bring the two worlds together. It’s out of the blue and feels very fake. I’m not even going to touch on the fact that the Rangers defeat the Master by making him eat too much or how Rita comes back into play.

What do I like about Mystic Force? That’s a hard list for me to come up with, but I’ll try. I already mentioned that I liked the Solaris Ranger design. I did appreciate when they did let the characters be more than two dimensional like when Nick and Xander have a bit of a heart to heart towards the end and Xander talks about when he moved to the States even though these moments are very few and often squandered. Korrag was pretty cool. I liked his design and he reminded me a lot of Zen Aku from Wild Force. I just felt like they kept making him too powerful. I did like the Legend Warrior Mode that the Rangers received in the series. I thought the suits looked much better, and it was cool when they first brought them out. I did find it odd that the staffs were rotary devices which felt like returning to the past since the Rangers were using cellphones, but there you go.

As far as a central theme for the season, I would sum it up in the word “belief.” The Rangers first gain powers simply by believing that the powers were real. Throughout the season they have to believe in themselves and in their friends to overcome the darkness. In the end, Itassis turns good because she believes that that the Rangers have more to offer her in terms of knowledge. Vi sees Matoombo isn’t a terrible monster and believes he can be better. The humans and magical people believe they can help the Rangers in the end, and they do. The belief in something can grant it tremendous power.

This season really left a lot to be desired in my opinion. I really did not like this season, and it honestly makes me scared to continue into Operation Overdrive.