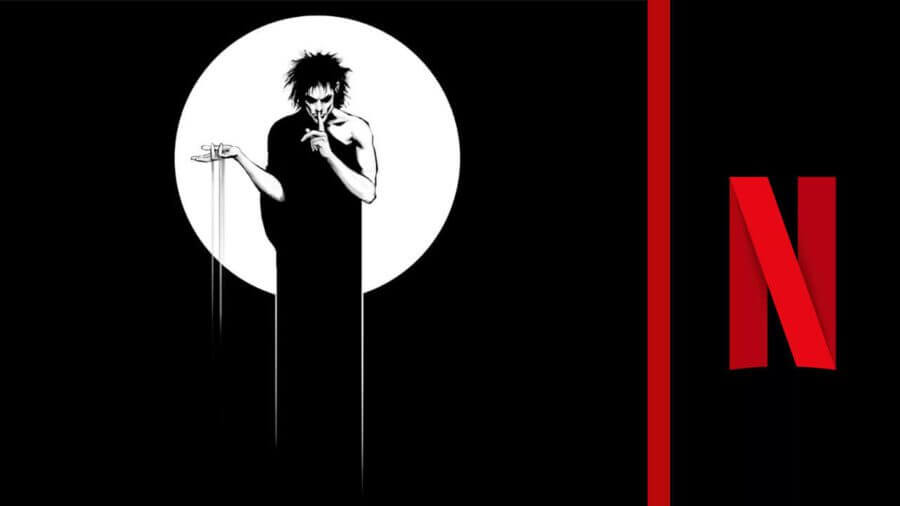 A new year means we should be hearing a lot more about Netflix’s The Sandman in the coming months after filming began in October 2020. Here’s the latest on The Sandman including all the current casting rumors, where the series is in production and when we can expect to see it grace our Netflix subscriptions.

In July 2019, it was reported by Deadline that Netflix and Warner Bros. TV had held talks to discuss the future of Neil Gaiman’s The Sandman. With confirmation that Netflix has successfully picked up the series shortly afterward, this brought the title out of the development limbo that it had been in for over a decade.

When is The Sandman season one coming to Netflix?

In an interview with Digital Spy, Neil Gaiman confirmed that the series will be arriving at some point in 2021. Given the production delays (see below) we’re currently expecting the latter half of 2021.

What is The Sandman?

The Sandman is an American comic book series created by Neil Gaiman. It stands as one of the few comic book titles to become a New York Times bestseller. The Sandman series was the flagship title for Vertigo comics. Neil Gaiman’s writing is famous for his take on mythology and his use of anthropomorphic personification of metaphysical entities. Some of Gaiman’s most recent and most popular works are titles such as Starz’ American Gods, Good Omens on Amazon Prime, and Lucifer on Netflix.

The story of the Sandman revolves around the character Dream, one of the Seven Endless. Dream, along with the other ‘Endless’ are billions of years old and each represents an embodiment of a natural force. Dream, also known as Morpheus along with a whole heap of other names and titles acquired over billions of years, is the anthropomorphic personification of dreams. Morpheus resides in his realm “The Dreaming” where he has complete and utter control but struggles to adapt to change (a common theme recurring throughout the series).

At the beginning of the story, Morpheus is summoned by occult ritual but is captured and held prisoner for 70 years. Eventually escaping, Morpheus would reap his vengeance upon his captors and would return to his realm. During Morpheus’ absence, his realm had fallen into a state of disrepair and would set about rebuilding it. While captive, Morpheus had time to reflect on his past but the challenge of undoing past sins would be an enormous undertaking that’s billions of years old and set in his ways. 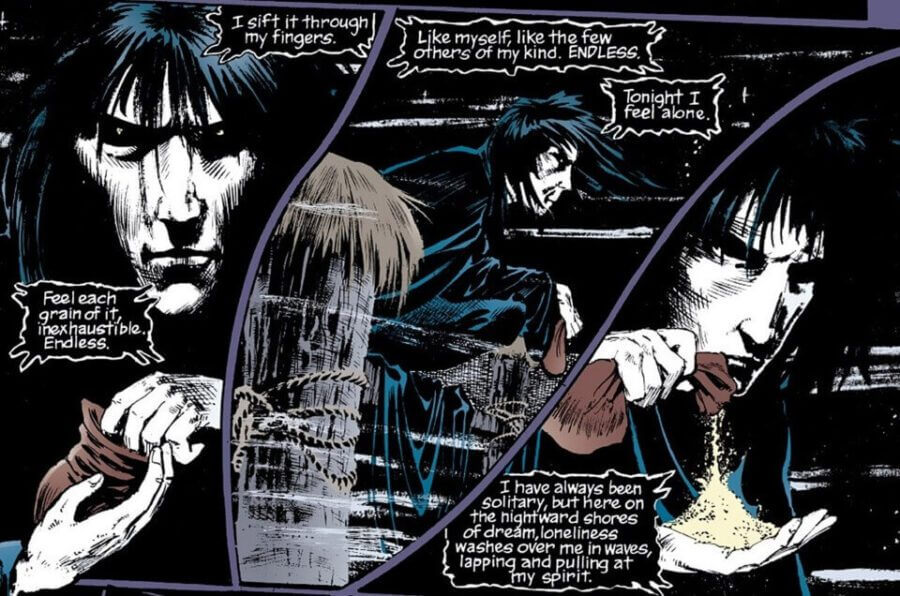 Who are the cast members of The Sandman?

Prior to the official announcement, we learned from Daniel Richtman and his Patreon that Tom Sturridge would be taking on the role of Dream aka The Sandman.

“The titular Sandman. Lord of Dreams and keeper of the realm of the Dreaming. Late 20s/early 30s. Ghostly, rail-thin. Because dreams are the inspiration for all life and creation, Morpheus sees governing them as a grave responsibility. He is an honorable, principled being, but he can be a bit obsessive about his duties and is ruthless when displeased. Dream’s obsessiveness can leave him out of touch with humanity, as he sees human beings as mere engines for dreams. An arrogant god who eventually learns that he must change or die.”

Tom Sturridge is Dream aka The Sandman – Copyright. Vertigo Comics

“Supernaturally handsome, The Corinthian exudes style, sex, wit, and a predatory wrongness. A nightmare-come-to-life, but one you can’t keep your eyes off. Embodies humanity’s darkest, most sadistic, homicidal impulses when they are not bound by compassion, empathy, and love.

Originally created by Dream, The Corinthian is determined to thwart his maker at every turn.”

“Roderick Burgess is a self-proclaimed sorcerer & prophet. He is the founder of the Order of Ancient Mysteries, which promises self-actualization through the occult – for a price. In truth there is nothing magical about Roderick. He’s a fraud – but an energetic, intensely charismatic one. A narcissist, he relishes encounters with much younger women and the accumulation of wealth and treasure. Wounded by the untimely loss of his eldest son, Roderick treats his youngest son, Alex, with cruelty and disregard.”

In January 2021, DiscussingFilm reported that Gwendoline Christie (known for roles in Game of Thrones and Star Wars) has been cast although it wasn’t clear in what role although they speculate that it could be either Desire or Death. Gwendoline also teamed up with Neil Gaiman recently to narrate The Sleeper and the Spindle for BBC Radio 4.

Vivienne Acheampong will take on the role of Lucien, the head librarian of the Dreaming, and resident of Dream’s castle. The job of Lucien is to take care of Dream’s vast library, overseeing the collection of every book that was ever imagined, regardless of whether or not it was published.

The Sinnerman and Dream’s emissary to Hell, Cain is the brother to Abel. A neighbor of Dream, Cain resides in his home in the House of Mystery. Cain loves his brother despite his obsessive and compulsive desire to kill Abel.

The brother of Cain, Abel has to put up with his brother’s antics on a regular basis, especially when he is killed. Immortal like his brother, Abel is able to revive and recover from death and has the vain hope that he and his brother can have a more harmonious relationship.

More cast members are expected to be announced soon!

How much of The Sandman will be covered in the first season?

Neil Gaiman himself has promised fans that The Sandman adaptation will be faithful to the comics.

Preludes and Nocturnes is the first volume of The Sandman and covers issues #1-8. With the first season set to cover the first volume and some of volume two (The Doll’s House), there are loads to look forward to.

At the DC Fandome event, though, Neil Gaiman confirmed that the story will not start in the 1980s instead it will start in the modern day for the Netflix series.

The Sandman has ten volumes in total (75 issues) so this means Netflix has the potential to produce at least four seasons.

Could Lucifer make an appearance?

It has been confirmed that Lucifer will star in The Sandman series. Fans of the Lucifer series will be disappointed to learn that Tom Ellis won’t be reprising his role as the Devil, but the appointment of Gwendoline Christie offers us a brand new and intriguing take on the character.

Lucifer made an appearance in Preludes of Nocturnes (Issues #1-8 of The Sandman). He also made another appearance later on in The Sandman‘s run during The Kindly Ones in issues #57-69.

What about other DC characters?

Throughout the run of The Sandman other popular DC characters have made cameo appearances. Batman is definitely the most high profile character that has had a cameo, followed by Green Lantern and Martian Manhunter. It’s highly doubtful any of those heroes will be making an appearance.

Lesser-known characters such as Black Spider, Doctor Occult, and Mister Miracle could make an appearance assuming Warner Brothers allows it.

Was Lucifer canceled because of Sandman?

A small portion of the Lucifer fandom believed that Lucifer has been canceled in favor of The Sandman. Neil Gaiman took to Twitter to directly deal with the issue when asked by a fan:

Hello Mr @neilhimself ,
Some Lucifans believe you are the reason why Netflix ends #Lucifer , to promote Sandman instead. But Lucifer comes from you too!
Please, tell me it is not true, or, if it is, that it is Netflix’s decision and not yours.
Thank you,
Best regards

What is the production status of The Sandman?

Shooting for the series was supposed to originally begin at the end of May 2020 however as you can imagine, that wasn’t able to happen.

In an interview, Neil Gaiman said:

“We’re working with Netflix, we were meant to start shooting at the end of May.

Given this COVID world, everything is on pause.”

On his blog on Tumblr back in April 2020, Gaiman had the following to say:

“It’s going really well, except it’s kind of hibernating right now until people start making TV again. The scripts for the first season are written, casting had started, directors hired, sets were being built. Everything was ready to go into production, and then we moved into a pause. As soon as the world is ready to make TV drama, Sandman will move smoothly back into being made. In the meantime, we are taking the opportunity to get the scripts as good as we can.”

On September 27th, 2020 Neil Gaiman shared when the series begins production saying the series “begins shooting in 3 weeks” which would be around mid-October 2020.

That was then confirmed to have started filming on October 19th, 2020.

Oh, we started shooting on Thursday. Dr John Hathaway has brought a book from the museum in which he works, to Roderick Burgess. But you’re right, it’s going to be time to announce some casting soon. https://t.co/goXqhEZHgi

How many episodes will The Sandman season one air?

Neil Gaiman himself confirmed the number of episodes the first season will debut with that being 11 episodes.

The first season will be eleven episodes. That’s the start of it all. Preludes and Nocturnes and a little bit more. https://t.co/tOlfJ1kS1y

Other The Sandman news relating to Netflix or otherwise

Are you looking forward to seeing The Sandman on Netflix? Let us know in the comments below!