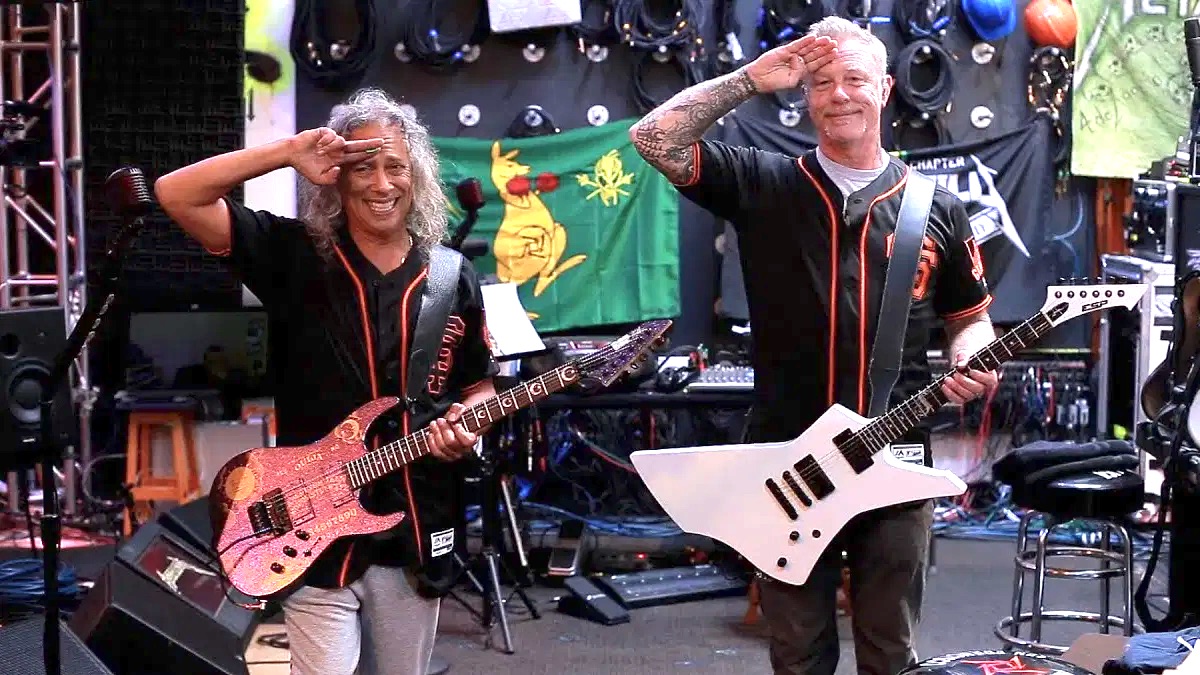 The San Francisco Giants have hosted an annual “Metallica Night” the past several seasons, but with the COVID-19 pandemic keeping MLB stadiums vacant, the event didn’t happen this year. Instead, Metallica’s Kirk Hammett and James Hetfield played “The Star-Spangled Banner” remotely prior to the Giants game against the Colorado Rockies on Wednesday (September 23rd).

As they’ve done in the past, the duo donned Giants jerseys during the performance, but this time they rocked the anthem from their own headquarters. It’s not exactly Jimi Hendrix, but Hammett and Hetfield give it a faithful go, synchronizing for a loose and joyous take, delivering a shred-tastic rendition.

As one YouTube commenter remarks, it “gets better every single time they play it.” In years past, Hammett and Hetfield actually played the anthem on the middle of the baseball diamond, their guitars pumping through the stadium PA. Hetfield played some slick Giants-themed guitars on those occasions, sadly missing for the remote performance. They’ve also played the anthem at NHL games and prior to Game 5 of the the 2015 NBA Finals for the hometown Golden State Warriors.

Heavy Consequence documented last year’s “Metallica Night”, a fond memory of what seems like a bygone age for the MLB. Hetfield and Hammett played the anthem while drummer Lars Ulrich tossed out the first pitch and goofed off with mascot Lou Seal.

This season, during the pandemic, real fans have been replaced by cutouts of people at select stadiums — so the stands don’t look totally empty for both the players and television broadcasts. The cutouts have also been a way to honor the memory of past baseball legends and other luminaries, who appear in the stands in cardboard form. Late Metallica bassist Cliff Burton’s father Ray, who passed away earlier this year, appeared at a Giants game, while late Pantera drummer Vinnie Paul popped up at a Texas Rangers game, to the delight of a TV reporter. The Blue Jays, meanwhile have been featuring a cutout of the very-much-alive Rush frontman Geddy Lee at their home games.

You can watch Metallica’s most recent performance of the National Anthem below.