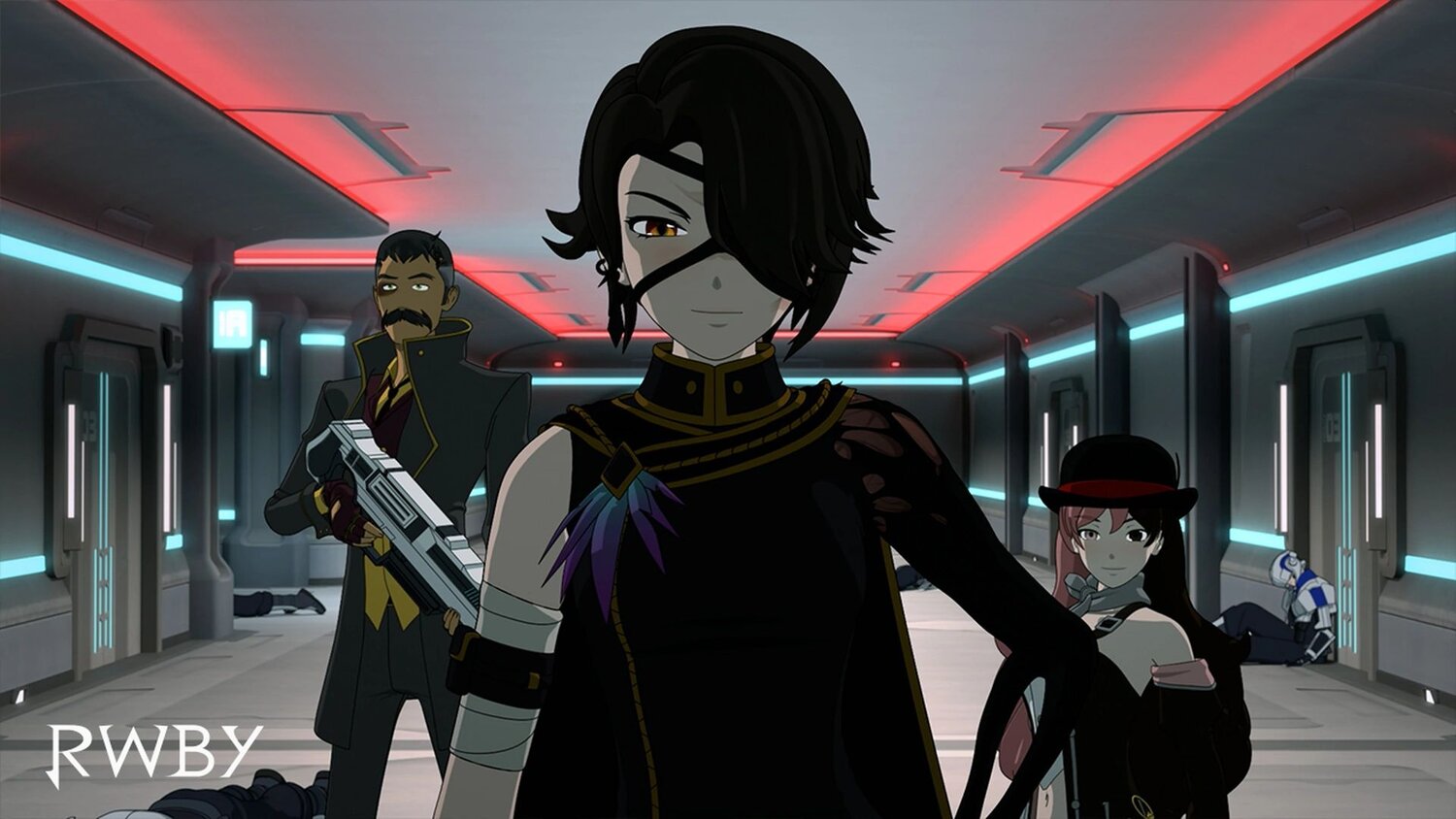 Holy crap, there are a lot of intertwined stories with quite a bit happening. We start off with Jaune and Nora going to the different portals to get the citizens of Atlas and Mantle to know it’s safe to go through so that they can go to Vacuo. Emerald, Oscar, and Ren are leading the people as they leave to Vacuo with Ren using his semblance to help hide the negative emotions. There are just some problems with that idea. They end up in a sandstorm, and Ren can’t keep his semblance going forever. Penny was supposed to also go through and I assume use the Staff to help somehow, but she gets a little busy.

You see, Cinder is in this little pocket dimension and ends up blowing some people off the platforms. This naturally gets Team RWBY to go try to deal with her. Neo then also shows up and the group is struggling with Penny joining them. Oh, and did I mention that Neo tries killing Ruby, but Yang gets in the way and ends up falling off the platform? Ambrosias warned them to not fall off, but we don’t know what happens if they do. Blake tries saving her, but her weapon falls short and then we see Yang disintegrate. Naturally, this causes all of Team RWBY to be going through a lot, and Blake is just pure rage I think at this point. I have no idea what is going to happen with this. Ambrosias has said that he can’t bring anyone back to life. Part of me wonders if somehow this will let Salem bring Yang back as a zombie or something like that which would be terrifying, but I do have a hard time believing that she’s going to stay dead. You know?

We find out during the fight that Cinder used the last of Jinn’s wishes to learn about our heroes’ plan. That’s how she’s currently staying one step ahead of them. The question is, how far into the future did Jinn show her? Can Cinder just die already? I still think about how much I love Watts calling her out. I also love Neo.

Anyways, speaking of Watts, we get to see that he’s the one that cut off Jaune’s call to Atlas and Mantle. I’m not surprised in the slightest and had already guessed it was him. He also has an Atlesian Knight run up to Qrow and Robyn and try blowing them up. Marrow actually gets between them and the blast and takes the brunt of the damage which means he can’t use his semblance anymore and Harriet and Vine run into the ship with the bomb for Mantle. Harriet is determined to carry out the mission and I hate her. She’s blindly loyal and claims that Clover would’ve seen it through. Vine actually tries to stop her and we find out that there was some deeper connection between Clover and Harriet. Robyn and Qrow also end up working to try to fight Harriet and everything. It’s becoming a mess in a small area. However, Watts ends up then hacking into the ship they’re in and turning on auto-pilot. The current guess is that he’s going to have it head for a portal and blow up in the pocket dimension because he’s evil.

The final thing that we see Watts do is open Ironwood’s cell. Ironwood grabs his weapons and uses the gun amplifier (I don’t know what it really is, so I’m sticking with that) and ends up just obliterating Jacque Schnee. He blows through the cell and we can’t see a body. That’s cold. He then heads to the Vault and who should be there but Winter. This is my favorite part of the episode. He tells her that his final order is for her to stand down and she calls back to him that her oath is to protect the Kingdom of Atlas no matter what the threat is, so she won’t. Then, her saber becomes two swords. I forgot that it could do that! This is so cool! Winter is becoming one of my favorite characters in this show. I’m really worried for her though. Ironwood may be cray cray, but he’s a good fighter.

I have absolutely no idea how this season is going to end. I hope that Shade Academy students show up to help the refugees, particularly Team SSSN and Team CFVY. What did you think of “Worthy?” What do you think is going to happen?