Our Annual Report continues today with the announcement of Eric Andre as our Comedian of the Year. Stay tuned for more awards, lists, and articles in the days and weeks to come about the best music, film, and TV of the year. If you’ve missed any part of our Annual Report, you can check out all the coverage here.

At the start of 2020, Eric Andre had a pretty epic year lined up. It was set to begin in March at SXSW with the premiere of his debut film, Bad Trip, followed by the release of his first-ever stand-up special, Legalize Everything, and capping off with the long-awaited fifth season return of The Eric Andre Show.

Of course, like everyone else, Andre saw his plans change as a global pandemic began to shut down everything on his Bingo card. This included Bad Trip’s premiere and its following theatrical release being cut short. At the time, he felt “the most depressed I’ve ever been,” leaving him to embrace his inner Lebowski for about a month.

However, Andre’s story ultimately has a happy ending as Netflix wound up picking up the film for 2021, and his other two projects went on to be well received by his fans and audiences alike. Looking back, both projects not only served as a perfect distraction, but seemingly filled a void that desperately needed to be filled in 2020.

There’s something surprisingly universal about Andre’s manifested blend of brilliant, controlled chaos and insanity. He manages to expose the superficiality of the society we’re living in, while also showcasing the unexpected good in people. Like those who will stop to help, say, a man who is dangling from a fire escape with exposed bones and blood and fecal matter dripping from his bicycle shorts. In one fell 10-minute swoop, you get to see both the shit and the good that’s in humanity — and laugh your ass off in the process.

While waiting for him to join our Zoom call, I had a feeling that the Eric Andre I was about to talk to was not the same one that most people would be expecting. And I was right. I was momentarily met by a subdued, relaxed Eric Andre in a gray sweatshirt with Air Pods dangling from both ears. “Where are you? Some sort of book depository?” he asks, referring to the numerous unrelated binders that sit behind me on a shelf while we talk. And while he may not have been in performer mode, there were still plenty of moments that felt like prime Eric Andre Show content.

There was no desk being smashed, no Seal Team 69 being hoisted down from the ceiling, or other standard shenanigans going on. But for some reason, when you tell someone that you’re talking to Eric Andre, this is immediately what they think you’re getting yourself into. But there’s a thick line between fiction and reality that is consistently blurred, and Andre insists that he’s no exception (although I also got the impression that he doesn’t really mind the confusion, either).

It’s on that intriguing note — and citing a year of groundbreaking comedy and stellar output — that we name Eric Andre our Comedian of the Year. In the wide-ranging chat found below, we talked about everything from the greatest prank ever pulled on him to what he intends to take away from a year that, by his account, “really sucked.”

On Staying In Character 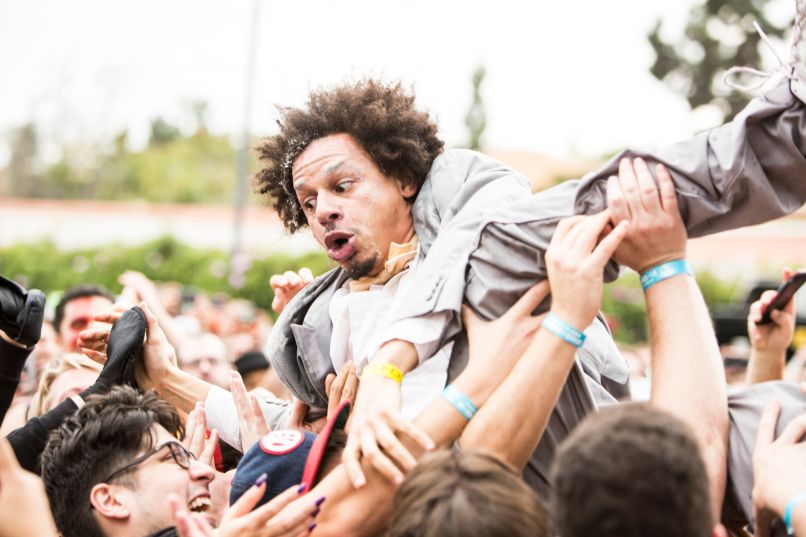 Over the past eight years, you’ve become identifiable with ranch dressing. Roughly, how many bottles of ranch dressing would you guess fans have brought you to sign?

Sign??? I thought you were going to ask how much I’ve drank.

I got in and out of the ranch-drinking business pretty quickly, because I’ve drank enough. I’ve drank more than any man should’ve drank in his life. I’ve signed a lot of bottles. It might be in the thousands. I don’t know. It’s a very common prop, for sure [to bring to his stand-up shows].

When you do meet your fans, are they expecting you to be in character?

[Laughs] I think they’re typically underwhelmed that I’m maybe a little bit more boring in real life than in the show. It depends on the fan. I think it’s all case by case. Sometimes, I’m about to miss my connecting flight to Dallas, and I just have to run through the airport. 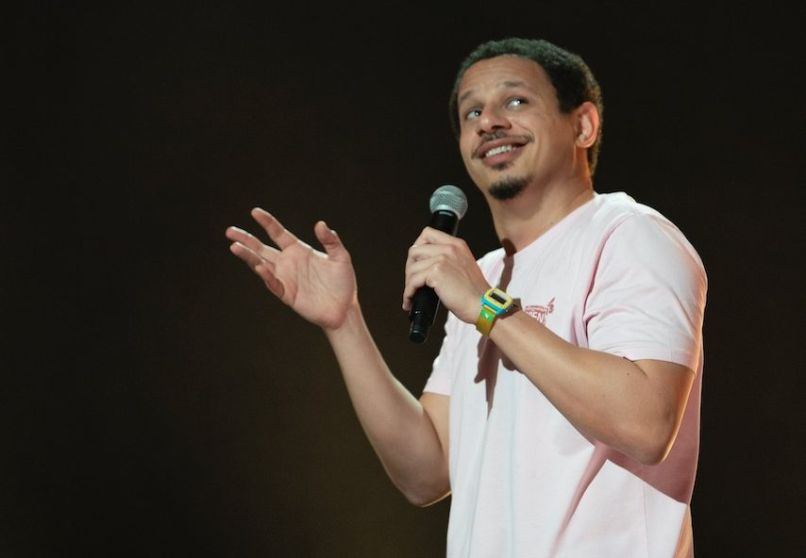 This year marked your debut stand-up special on Netflix, Legalize Everything. Were you looking to capture a different kind of experience for fans who are used to seeing a certain version of you?

Well, stand-up is a different medium from the Adult Swim show. So, I had to kinda split the difference between my persona on the show and my persona in real life. It’s obviously a heightened version of my everyday behavior, but not as heightened as the persona on the show. Basically, I toured that 60 minutes of material through like 49 cities nationally and internationally. So, I did tour that act and constantly chipped away at it and listened to recordings and rewrote stuff and got rid of stuff.

The special’s high level of energy is infectious. It seems to propel your audience into this state of almost hysteria at certain points.

Well, thanks. I mean, my energy comes from my nerves. It’s like me trying to war cry through my anxiety.

The ending came together so perfectly. Like, the fact that the fan’s mom, who you texted, not only called you back, but she also had edibles at the ready.

That was pennies from heaven. That was a gift from God that that mom was not only on the hook, but brought up drugs organically. It was almost to the point where I’m like, “People aren’t going to believe this is real when they see it.” But it was 100 percent real. And yeah, that was a gift from God, for sure.

Was that the best that bit has gone?

No, there’s been some killer ones. Because I would do that every night on the road, and I had some pretty equally amazing ones, but unfortunately they weren’t captured on film. I had ones where the mom and dad picked up, and the dad was like shirtless and terrified. Like they thought their kid was kidnapped, and they were looking at me — like studying my face — so they knew what to tell the police when they called. [Laughs.] It was like that terrifying.

So, they thought you kidnapped their kid and then went onstage in front of thousands of people?

Well, they were baffled. It was before I turned the phone around and showed the crowd. But, yeah. There were some amazing parents. There were some parents that would like flip out on you or be more crass and offensive than I was. I always would be pleasantly surprised. I got some heat … Where was I? I think it was a show I did in Nebraska, and this woman’s mom kind of lit me up. But it was perfect. She was roasting me in front of the crowd. And the crowd was loving it. It was perfect.

As long as the mom calls back, it’s a foolproof bit, because it’s in the moment, it’s improvisational, and there’s nothing more high stakes than messing with a mom. And it’s relatable. There’s something kind of G-rated about it. It’s not like a hard R-rated bit. Like, I could do that bit on Jimmy Fallon. In a good way. In a way, it’s universal. I used to just do it at random throughout the set, but then I realized that it was my closer. 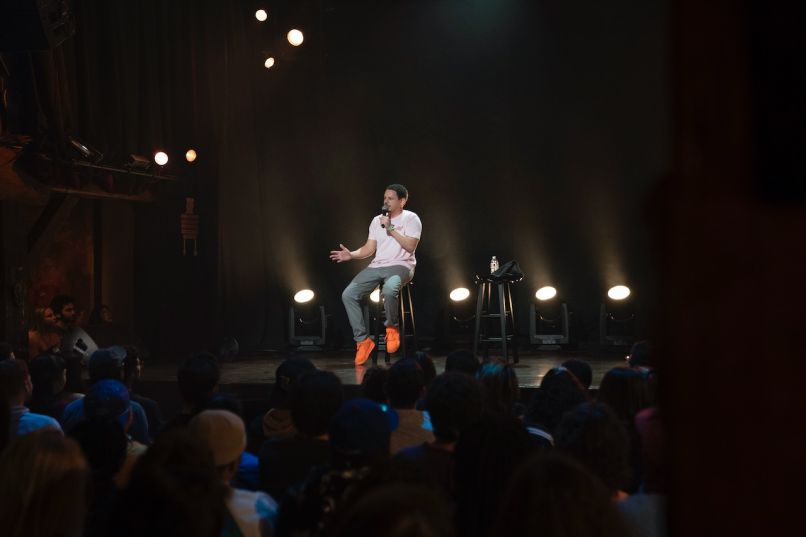 Of course, the thing everyone talked about when your trailer was released was the timing of having a COPS joke in there a few days after it got cancelled.

Yeah, but then I heard that COPS did not actually get cancelled. I heard that they just changed their name, and they’re already producing like a new version of COPS. I don’t really know. It might be a rumor. But the timing of that – COPS announcing their cancellation and that joke coming out – was also another gift from the universe. I think it was just pure luck, man. It was another one of those things where the timing was impeccable.

Sorry, someone’s ringing my bell. [Gets up and checks]. Oh, it’s just my Postmates. I forgot I ordered food. [To the Postmates driver, out the window] You can just leave it right there on the table. Thanks, bud. Appreciate it.

That’s the world we’re living in now. Getting everything delivered.

I know. It’s a weird, sad world. It sucks. [Under his breath] I’m so fucking over it.

I can imagine it’s strange having to promote stuff during the pandemic.

Part of it’s nice, because you can just sit from your home. Press can be exhausting, because you’re like flying all over the place and running to various shows and stuff. This is like I can just sit in front of my computer and Zoom 12 hours a day. There is something nice about that, but I miss the excitement of doing late night, doing Conan, Colbert, Howard Stern. Actually being there. It’s nothing like the real thing. The rush of that is like titillating. It titillates and excites me.

Read ahead to hear about Hannibal leaving, replacing Ellen, and the greatest prank every pulled on him…