It’s not often that you lose followers for participating in a social media challenge, but that’s what just happened to Billie Eilish. The Grammy winner lost 100,000 followers on Instagram after she posted a drawing she made of some women’s breasts.

The 19-year-old Eilish was participating in the viral “Post a Picture Of” Instagram challenge, in which users put a question box in their story where their followers can tell them what to post pictures of. As Cosmopolitan noted, Eilish answered one prompt by posting a picture of her lockscreen, and then followed another prompt by posting “a drawing you’re really proud of”.

For the latter, Eilish shared a notebook page full of doodles of nude female bodies that she says she drew. “These probably lol I love boobs” wrote Eilish in the caption. The drawing may have violated Instagram’s byzantine terms of service for nudity, but nothing about it should have been controversial. Women have bodies. Eilish drew some. Apparently she’s proud of the drawing. That should have been the end of that.

However, one eagle-eyed sleuth quickly realized that in the half hour since she first shared the photo, Eilish had rapidly lost 100k Instagram followers. Once the “Therefore I Am” singer noticed the fan’s post regarding the follower drop, Eilish screencapped it and responded to it in her story. “LMFAOOO y’all babies smh”, Eilish wrote in reaction to her sudden dip.

There’s no way to prove that the drawing was the sole source of this, but since there’s been a long line of sexist non-controversies surrounding Eilish’s body and the way she chooses to present herself, it seems likely that some of her followers were uncomfortable with her embracing femininity online. If there are grown adults who are squeamish at the site of platonic nudity, then, as Eilish said, “ya’ll babies smh”.

Outside of social media nonsense, Eilish recently shared the first trailer for her upcoming Apple TV+ documentary The World’s A Little Blurry. Before that drops in February, she’ll co-headline the virtual ALTer EGO fest alongside the Foo Fighters. 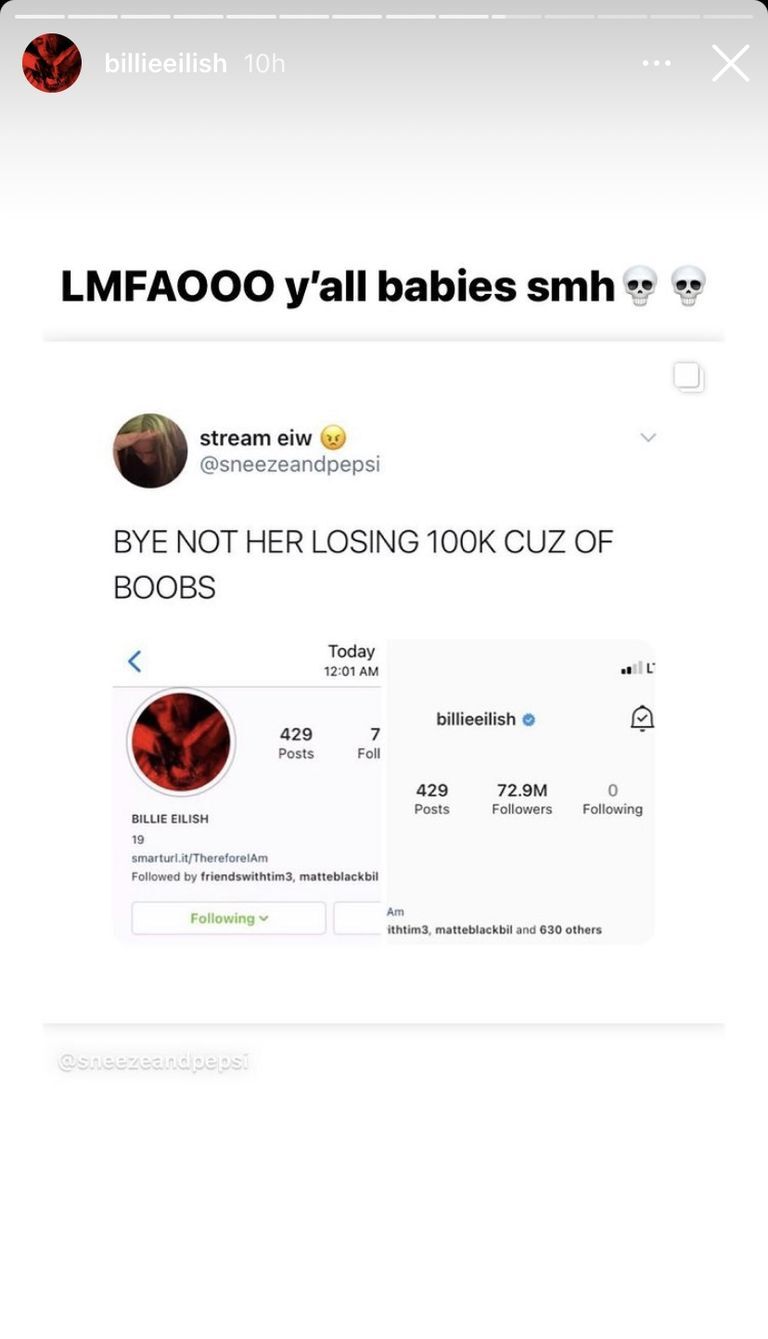