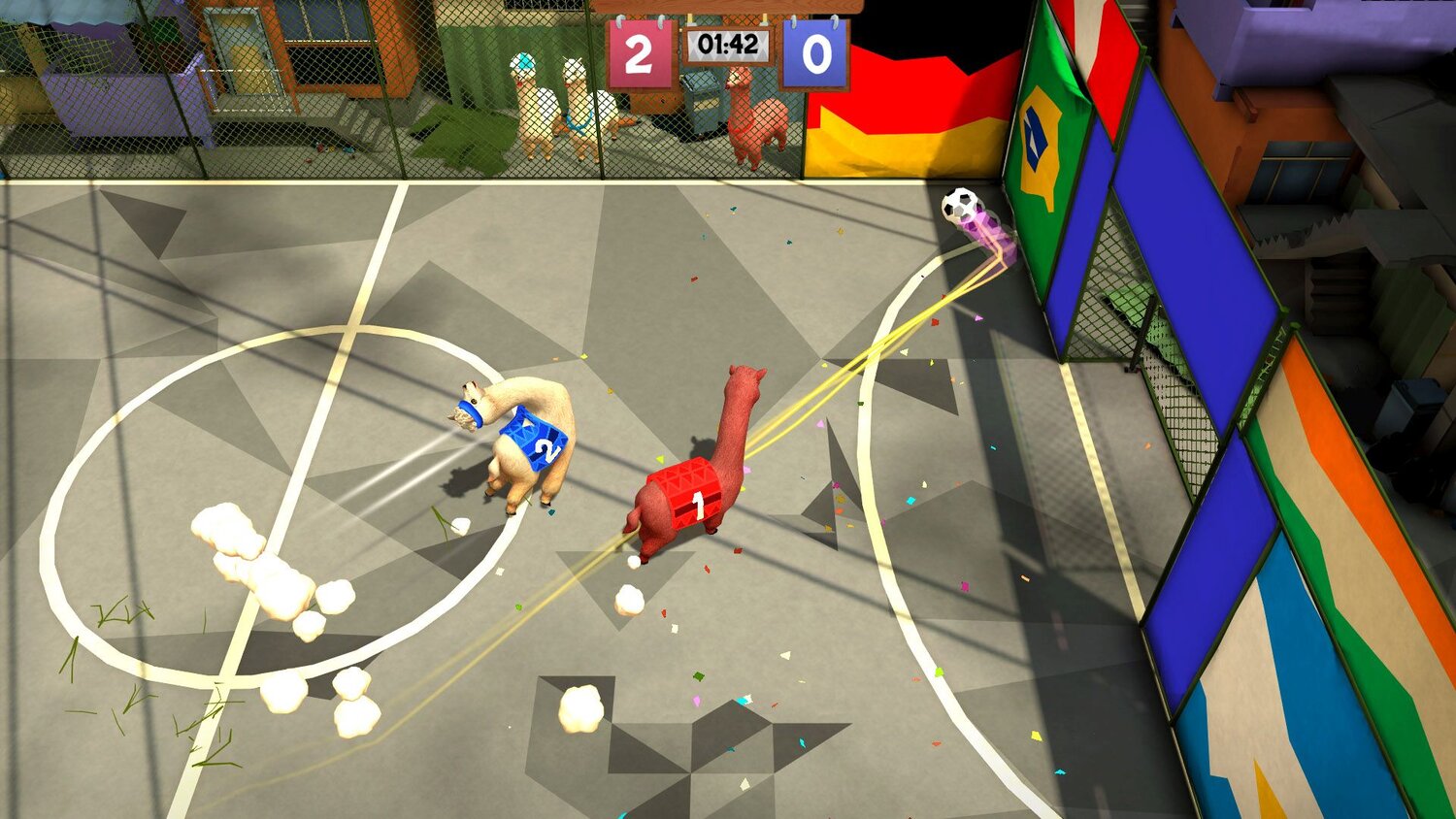 Alpaca Ball Allstars is a new game from Salt Castle Studio and Badland Publishing that I just had to try. It looked like Rocket League with alpacas instead of cars and just seemed like goofy shenanigans. I was lucky enough to be sent a PC copy from Badland and I’ve enjoyed my time. Alpaca Ball Allstars is available now on Nintendo Switch and PC.

I’ve been playing the game’s career mode as well as its versus mode and overall, it’s fun. It’s goofy and wacky for sure, but enjoyable. The story for the career is simple: you must train to become the best Alpaca Ball player to save Machu Picchu. You do this by defeating opponents in 1v1 matches (2v2 if playing co-op). Not the deepest storyline, but chances are, you’re not playing this game for that. The versus mode lets you play in groups of up to 8 players with bots thrown in as needed. This is probably where you’ll spend most of your time.

When actually playing the game, you run around and then use your head like a hockey stick. It looks awkward and goofy, but it’s still fun. You press one button to shoot the ball forward and one to shoot it backward. You can also jump and do a power shot. Personally, I never use the power shot since it seems to always shoot behind you instead of in front of you and therefore is much trickier to use. You can also dash when you really need to close some distance. For the most part, everything is fairly smooth. I do have one complaint though. It’s way to easy to become stunned. I feel like every 10 seconds my alpaca becomes stunned for one reason or another. It really gets annoying after a while.

Throughout a game, you’ll also have powerups randomly trigger (assuming you turned them on) and this adds a fun dimension to the game. A player will randomly receive a powerup such as a football helmet which appears to help protect your alpaca from becoming stunned or the ability to better aim your shots or even just grow a longer neck. There are some powerups that leave me a little confused like the armadillo, but sadly, there doesn’t seem to be any kind of explanation for what the different ones do.

Oddly enough, Alpaca Ball Allstars does not have an online mode. You can supposedly play with up to 8 players, but it’s all to be done locally. Now, with Steam, you can use Remote Play Together and it worked surprisingly well when I tried it with a friend. Just make sure everyone is using a controller. Speaking of which, I did find the controller to be more comfortable, but using the keyboard isn’t as bad as other games if you need to.

Alpaca Ball Allstars is silly fun, something that many of us need during these often depressing times. There are definitely areas it could improve on like adding an online multiplayer component or having the power shot actually go forward, but it does have a charm. If you’re looking for a wacky game, it’s worth a shot.